(Maybe we should wait to hear from the very powerful and extremely rich Ontario Teachers Union before passing judgement?)

Mosul under the control of the self-claimed Islamic State(ISIS). Rudaw photo

“For refusing to follow the ISIS curriculum in schools which contains extremism ideology and encourages violence, the group executed several teachers and civil servants in Nineveh ,” Ghazwan Dawdi, a member of Nineveh provincial council told Rudaw.

2. UK left oil-rich Saudi out of drive to halt death penalty: Country was only one with capital punishment missing from list as Britain targeted Barbados and Jordan
(The UK is becoming embarrassing)

Saudi Arabia was omitted from an official UK campaign against the death penalty despite the number of executions it carries out.

The oil-rich state was the only major country with the death penalty left off a Whitehall list to be challenged by diplomats, it emerged last night.

Those given a greater priority than Saudi Arabia, which carried out 158 executions last year, included Barbados, Singapore and Jordan which passed fewer than ten death sentences between them in 2014. 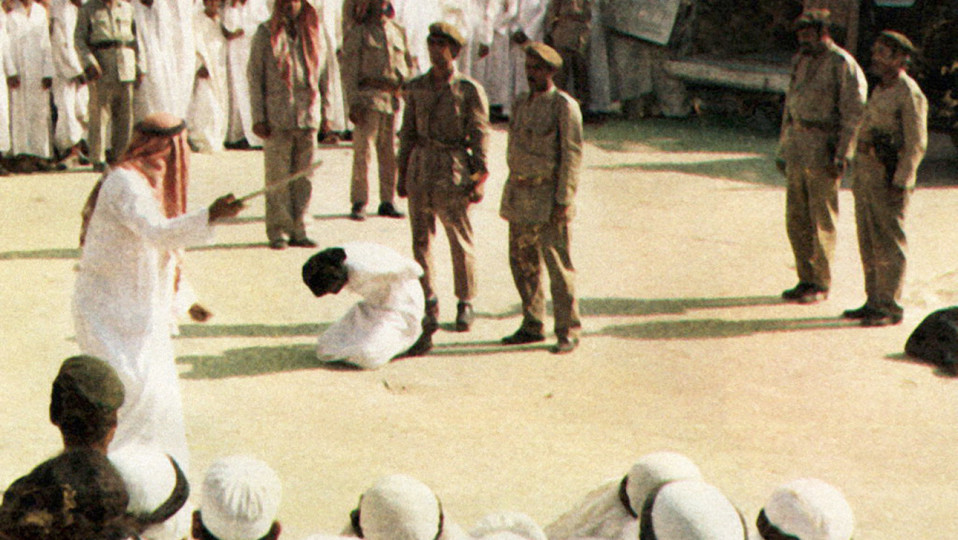 As anger over the inquiry into UK soldiers’ behaviour during the 2003 Iraq War intensified, they said ‘ambulance-chasing’ law firms should not be handed taxpayers’ money.

They also demanded an inquiry into the firms and said they should be prosecuted for using agents, such as Abu Jamal, who persuaded a grieving widow to mount a claim against the MoD in the aftermath of the war.

The practice of ‘touting for business’ is a breach of the Solicitors’ Code of Conduct whether it is undertaken by the firm or an agent working for them.

(An official list of acceptable adjectives we can use to describe what group and what group not would be helpful. But of course, if they did that, they couldn’t arrest us arbitrarily for saying whatever upsets the mustards on a moment-by-moment basis could they? Important to keep it fluid I suppose if you want a really effective despotism) James McConnell — the Northern Irish Pastor charged with making “grossly offensive” remarks about Islam —  has been found not guilty by a judge at Belfast Magistrates’ Court.

Mr. McConnell, 72, stood accused of a “hate crime” for “sending a malicious communication” after broadcasting a sermon on the Internet last year in which he described Islam as “heathen” and “satanic”. The charge carried a possible sentence of six months in jail.

5. U.K. Parliament Will Debate Banning Donald Trump From the Country

(I’m pretty much ready to go all in for Ted Cruz. But the Americans should elect the Donald just to Trump the British if they ban him. I think that might do something to the ‘special relationship’ which is long overdue for an overhaul)

Ministers will consider whether to stop the GOP presidential nominee from entering the country on Jan. 18

Ministers will consider whether or not to prohibit Trump from entering the country Jan. 18 after a petition to Parliament calling for a ban gained more than half a million signatures. “The UK has banned entry to many individuals for hate speech,” the petition reads. “If the United Kingdom is to continue applying the ‘unacceptable behaviour’ criteria to those who wish to enter its borders, it must be fairly applied to the rich as well as poor, and the weak as well as powerful.”

(Is there anyone left that reports news and doesn’t do propaganda anymore? Stop mandatory funding of the BBC)

The mayor of Cologne has summoned police for crisis talks after about 80 women reported sexual assaults and muggings by men on New Year’s Eve.

The scale of the attacks on women at the city’s central railway station has shocked Germany. About 1,000 drunk and aggressive young men were involved.

City police chief Wolfgang Albers called it “a completely new dimension of crime”. The men were of Arab or North African appearance, he said.

Women were also targeted in Hamburg.

(The only thing the German government is shocked about is they only managed to bury the story for 3 days before it got out. That I do believe is shocking to them)

Kurdish protestors have stormed the Conservative Party headquarters (CCHQ) in Westminster, demanding the British government stop supporting the Turkish state which is “murdering” Kurds, “colluding” with jihadists and “Islamizing” Turkey.

Protestors caught security off guard just before 3pm, brazenly walking in through lobby. Police arrived soon after, and Breitbart London was the only news outlet to make it inside before they sealed off the door.

The crowd of around 100 mainly British Kurds, old and young, chanted “wake up Britain” and “stop the genocide”.

8. Cologne Mayor: Women Should Be More Careful After Migrant Mass Rapes, Promises ‘Guidance’ So They Can ‘Prepare’

(anyone want to bet that there will be a massive ‘Slut Walk’ protest/tradition resulting from this? Anyone? No?)

A political scandal is developing in Germany as ordinary citizens wake up to the scale of the migrant crime cover-up, and the callous reaction of the mayor of Cologne to mass-sex crime on new year’s eve.

The Mayor of Cologne has spoken out about the attacks, but her carefully chosen words are unlikely to delight many. Rather than addressing the root causes of the violence — unlimited mass migration and a totally failed system of integration — the newly elected pro-migrant mayor instead blamed the victims of the sexual abuse for having failed to defend themselves against the immigrant attackers.

Speaking on live television this afternoon mayor Henriette Reker, who was near-fatally stabbed in the run up to October elections by an anti mass migration campaigner, said in future women would have to be better prepared in her city to deal with migrants. She remarked: “The women and young girls have to be more protected in the future so these things don’t happen again.

9. A curious bit of CNN analysis here. Obama desperately supported Morsi and the Muslim Brotherhood in Egypt and has been an opponent of Al Sisi, who was put in place by the largest popular revolution in the history of the world. I think that applies both in raw numbers but more importantly, in percentage of the population that hit the streets. He neglects to mention that support for the Brotherhood when he mentions the seemingly contemptible support for Sisi which he claims for the US

10. Bahrain: Anger clashes between supporters of Sheikh Al-Khalifa Tiger forces in the town of Nuwaidrat

Thank you Richard, Buck, M., Wrath of Khan, Yucki and all for the great links and comments and observations. More to come soon including a very cool movement in Italy if I understand it right. Videos ready ASAP.

One Reply to “Mosul teachers need new union, the left betrays women in Germany in giant 180 degree turn and much, much more. Links 2 on Jan. 5 – 2016”