1. Anti-Islamist group PEGIDA knock Adele off the top of the German charts with a hymn called Together We’re Strong that features no lyrics

A wordless song released by the anti-Islam group PEGIDA has knocked Adele off the top off the top of Amazon’s German downloads chart.

The song, Gemeinsam sind wir stark! or Together We Are Strong!, is being sold to raise funds for the protest movement, short for Patriotic Europeans Against the Islamisation of the Occident.

The tune was made available to download from December 21 and has now overtaken Adele’s Hello.

(If people can find it, i would suggest buying it to support PEGIDA and making it your ringtone)

(TASS) – The Pentagon, refusing to transfer the data on terrorist targets in Syria to the Russian military, continues to fight against the Islamic State terrorist group “in word only”, Russian Defense Ministry spokesman Igor Konashenkov told reporters on Monday.

He thus commented on a recent statement by the Pentagon spokesperson Michelle Baldanza who confirmed that the US military did not intend to share with Moscow the information on IS targets until Russia changes its policy towards Syrian President Bashar Assad. “We are not going to cooperate with Russia on Syria until they change their strategy of supporting Assad and instead focus on ISIL (IS),” Baldanza said.

“The hackneyed thesis has once again confirmed that the Pentagon will fight against IS in word only, instead of taking real action,” Konashenkov said. “The statement by the US Defense Department spokesperson Michelle Baldanza about the [US side’s] refusal from any cooperation in the fight against Islamic State is a broken record, and it’s high time to change it,” he said.

The Russian Defense Ministry spokesman said that at last week’s news briefing of the chief of the Main Operations Directorate of the Russian General Staff, General Sergey Rudskoy, the military presented data on changes in the routes of illegal transportation of oil by the Islamic State militants.

A WOMAN with terminal cancer is feared to be planning a sickening Islamic State terror attack in Europe by disguising herself as a Syrian refugee – as the West faces a security lockdown over the festive period.

Anti-terror police are desperately searching for the 21-year-old, identified only as Oygul M., after fears she will attack Russia.

The woman, who has brain cancer, is believed to be based in Georgia with a 29-year-old male terror suspect, known as Bulat A.

But she could take advantage of Europe’s migrant crisis by entering Russian territory disguised as a Syrian refugee, officers said.

THREE months after Russia started its bombing campaign against Islamic State in Syria, US officials have said to finally have admitted Moscow is doing the right thing.

But speaking on condition of anonymity, a US intelligence official has revealed the airstrikes have seen results against terror.

He told Reuters: “The Russians did not go blindly into this, they are getting some advantage out of the price.”

According to the Kremlin, in spite of carrying out more than 5,000 airstrikes since the beginning of the campaign, Russian troops have suffered only a small number of casualties.

(The Express is pretty far behind in the news. Its now known that the US has been assisting Russia in its attacks on the IS but as an end run around the white house. In what might be considered the most civilized coup in history)

(I don’t get it. The mosque shouldn’t be there in the first place as it was operating illegally and getting government grants under false pretenses and the ‘damage’ they talk about is nothing. Its still more organized and less chaotic than my damn apartment. Basically its about 10 half burned books and if any European government bothered to read these books they would be illegal under the various hate crimes laws across the Western world anyway)

6. 1 killed, 10 injured in attack on tourists at ancient fortress in Russia’s Dagestan

(It is always good to read someone who gets it. The Islamic State is a symptom. Attacking it is like putting ointment on a blister of someone with the plague. The problem is as much in the mosque 2 blocks away as it is in the Islamic State)

A recent report by, of all places, the Tony Blair Faith Foundation, found that the Syrian rebels were mostly Islamic Jihadists and that even if ISIS were defeated there were 15 other groups sharing its worldview that were ready to take its place.

And that’s just in Syria.

The official ISIS story, the one that we read in the newspapers, watch on television and hear on the radio, is that it’s a unique group whose brand of extremism is so extreme that there is no comparing it to anything else. ISIS has nothing to do with Islam. Or with anything else. It’s a complete aberration.

Except for the 15 other Jihadist groups ready to step into its shoes in just one country.

8. Man buys toy plane for child for Christmas. Child opens toy and starts to play with it at Christmas. Toy does the following thing.

9. Iraqi FM says could use military option against Turkey if forced

(Everybody got enough beer and pork rinds?) 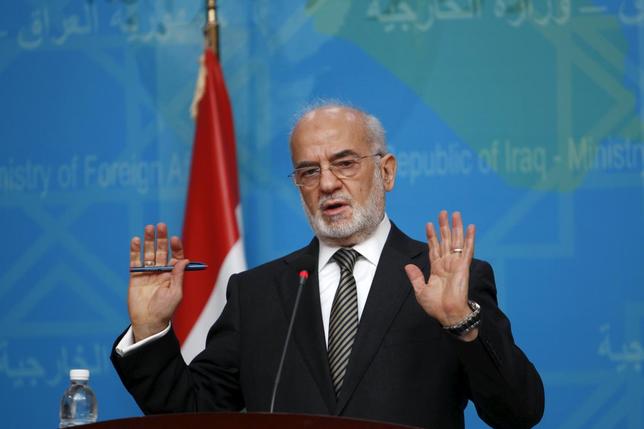 Iraq’s foreign minister said on Wednesday it could resort to military means if forced to defend itself from what it says is an intrusion of Turkish forces into part of its north.

Turkey said it had deployed a force protection unit earlier this month to the area due to heightened security risks near a camp where its troops were training an Iraqi militia to fight Islamic State insurgents. Ankara acknowledged that there had been a “miscommunication” with Baghdad over the deployment.

Iraqi security forces have had only a limited presence in Nineveh province where the camp is located since collapsing in June 2014 in the face of a lightning advance by Islamic State.

Foreign Minister Ibrahim al-Jaafari said Iraq was committed to exhausting peaceful diplomatic avenues to avoid a crisis with its northern neighbour Turkey, but insisted that all options remained open.

(Someday if we beat this thing and restore liberty and rights to the people of the US (and Canada!) they should carve a Mount Rushmore mk. II with Raymond Ibrahim, Robert Spencer, Pamela Geller, Bill Warner and a couple of others so that maybe we won’t forget quite as fast this time that there are always enemies of liberty out there to impose their will on us)

Teams of trained killers disguised as refugees were sent by the Islamic State (IS) into U.N. refugee camps to kill Christians, including “in their beds,” and to kidnap young girls to sell or use as slaves. This came out, according to a report, on October 24, soon after an IS operative “got cold feet and renounced jihad after witnessing Christians helping out other refugees within the camp. He then revealed that he had been sent with an Islamist hit squad to eliminate Christians as part of the hate group’s ideological drive to wipe the religion off the map.” The report also quoted an aid worker saying:

They’re like a mafia. People are even killed inside the camps, and the refugees are afraid to say if they saw somebody get killed. If you ask them, they’ll say, “I don’t know, I was asleep.”… The camps are dangerous because they have IS, Iraqi militias and Syrian militias. It’s another place for gangs…. They’re killing inside the camps, and they’re buying and selling ladies and even girls.

11. Kerry: We Brought Peace to Syria

A boastful recap of the State Department’s accomplishments, written by spokesman John Kirby, includes the bold subheadline of “Bringing Peace, Security to Syria” above a more modest entry talking about U.S. aid for those affected by the country’s turmoil and the U.S. push for a political transition from President Bashar Assad.

12. Andrew Bostom has provided a necessary piece of analysis here. The fatwa on how to rape women captured by muslims got a lot of press as the media has no problem presenting the Islamic State in a bad light so long as that light has a sharp edge before it spills on to islam and its scripture. Dr. Bostom puts a redirect on that fresnel and points it where it belongs)

Thank you Richard, M., Wrath of Khan, Andrew Bostom, and many many fine people who regularly send in materials of importance. Thank you all.

Chris Jones left a comment on another matter today which I hope everyone reads. It is frankly. the essence of socialism. You could read this comment, or you could read the book by Hedrick Smith called, ‘The Russian’ and get the same understanding.

6 Replies to “A dozen geopolitical events and data points on islamic non-miscability with civilization: Links 1 on Dec. 30 – 2015”