(Stephen’s segment starts around 39 minutes into the podcast)

2. It is interesting that at one point, the Wikipedia link to cultural Marxism led to the Frankfurt school and all the factual sources on the matter. And now, it points to what they now call, ‘The Frankfurt School Conspiracy Theory’. I guess this is a good sign. It means enough people are aware of this that they had to mount a defense.

3. Villagers’ fury over plans to build a refugee centre for 1,000 migrants in a community where only 100 people live

A developer has sparked outrage with plans to build a refugee centre for 1,000 migrants in a village with a population of just 100.

Charlie Tull wants to convert a disused business park in Littleton-upon-Severn, Gloucestershire, into a ‘one stop shop’ for people fleeing war in the Middle East.

But the plan has been heavily criticised by residents who said it would have a massive impact on village life and cause chaos on the roads. (That event above almost makes one think of giant UN conspiracies or something. Can’t be though)

4. Little Asylum Center on the Prairie 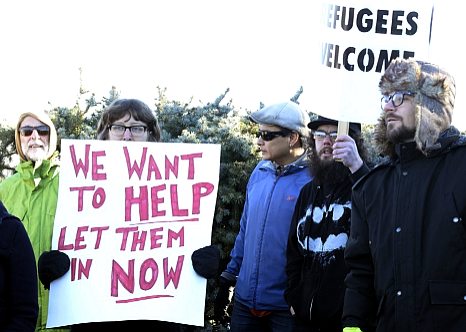 Justin “Baby Doc” Trudeau is Canada’s newly-elected Liberal prime minister. Mr. Trudeau has vowed to bring 25,000 “Syrian” “refugees” into the country by the end of the year, and is exerting considerable political pressure in an effort to make sure his plan is implemented.

The new influx of migrants is not popular in all parts of Canada, especially out West. Our Saskatchewan correspondent Harald sends the following account of “refugee resettlement” from a Western Canadian perspective:

Saskatoon, the largest city in Saskatchewan, has a population of 300,000. It was a third of that size fifty years ago.

5. MU professor slaps girl, violently drags her out of school BY HAIR for not wearing HIJAB, police say

Omar, whose Facebook profile lists him as being from Benghazi, Libya, grabbed the girl “very violently by the hair” and dragged her down stairs and into his car while slapping her, Officer Latisha Stroer told the Tribune in an email.

On Wednesday he was arrested on suspicion of child abuse.

(What is more important is how the judge deals with this case. I hope someone is tracking it)
6. ‘I was tossed out of the tribe’: climate scientist Judith Curry interviewed

Her record of peer-reviewed publication in the best climate-science journals is second to none, and in America she has become a public intellectual. But on this side of the Atlantic, apparently, she is too ‘challenging’. What is troubling about her pariah status is that her trenchant critique of the supposed consensus on global warming is not derived from warped ideology, let alone funding by fossil-fuel firms, but from solid data and analysis.

Some consider her a heretic. According to Professor Michael Mann of Pennsylvania State University, a vociferous advocate of extreme measures to prevent a climatic Armageddon, she is ‘anti-science’. Curry isn’t fazed by the slur.

Remember all those lectures on how ISIS terrorists would never waste time trying to sneak in with the “refugees”? Someone didn’t tell ISIS.

The ringleader behind the Nov. 13 attacks in Paris had plans to strike Jewish targets and to disrupt schools and the transport system in France, according to sources close to the investigation.

Abdelhamid Abaaoud, a Belgian national of Moroccan origin, also boasted of the ease with which he had re-entered Europe from Syria via Greece two months earlier…

Several people were arrested after clashes broke out between refugees at Berlin’s Tempelhof refugee centre on Sunday. The incident occurred while people were queueing for lunch.
SOT, Michael Elias, head of Tempelhof refugee camp (German): “The issue is that there are plenty of young men, travelling alone, which led to aggression bursting out in all directions, so that we had to stay back and I asked the security guards to stay down. The situation exploded internally. It was a complete unloading of tension, or however else you want to call it. Friendly enough, the colleagues [police] arrived and calmed the situation down in the hall. And it was contained and limited to the protagonists, who caused the uproar, a group of about 20 to 30 who triggered the fight. We have about 830 people, at the moment during lunchtime, 400 to 450 people are on the move. We have around 100 children, these are families, but plenty of singles.”

Thank you PP., M., Buck, and all who sent in materials. More to come shortly.