1. Hannity with Ted Cruz on Obama’s policies and the ‘refugee’ proposals

Dhaka: Islamic State terror group has appointed a ‘regional leader’ in Bangladesh and threatened more attacks on the “crusaders and their allies” wherever they may be found.

“The soldiers of the Khilafah in Bengal pledged their allegiance to the Khalifah Ibrahim (Abu Bakr Al Baghdadi), unified their ranks, nominated a regional leader, gathered behind him and dissolved their former factions,” the outfit said in an article in its latest online magazine ‘Dabiq’.

3. Trump reminds us of the news reports of huge numbers of muslims who cheered as the WTC came down. In fact I also remember that but that aspect of the story got crushed fast.

(There is also no video of OJ Simpson driving down the highways of LA in a slow moving white Bronco with a gun to his own head as he screamed, “I killed my wife” on the internet but that also happened and it was on every TV set in the Western World)

5. Iranians who claim to be refugees, are sewing their mouths shut or taping their mounts shut with thread inside the tape to look like they sewed it shut to protest countries not breaking their own laws to let them in and support them

(On what basis are these men refugees I wonder)

6. Chinese police use a FLAMETHROWER on ‘Muslim terror suspects’ after grenades and tear gas fail to lure them from cave

Chinese forces used a flamethrower to force more than 10 ‘terrorists’ from a cave in the western Xinjiang region in the hunt for what Beijing has called foreign-led extremists.

China said security forces had recently killed 28 members of a group that carried out a deadly attack at a coal mine in Aksu in September.

In its account, which could not be independently verified, the official People’s Liberation Army Daily said armed police had tracked the attackers into the mountains ‘like eagles discovering their prey’. 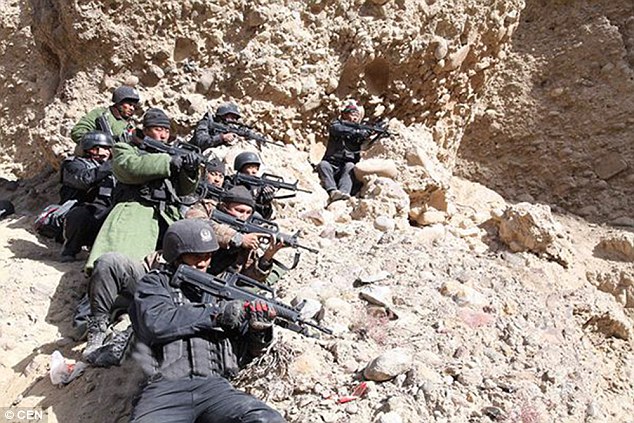 On the hunt: Armed officers spent 56 days hunting a group Beijing says were ‘Muslim terrorists’. This image is from September as they hone in on their targets

(I would be reluctant to eat anywhere in Xinjiang for a while)
7. Ontario Canada: Troops clearing space at CFB Kingston for Syrian refugees

(Go to the link and watch 2 videos punctuated by commercials on this to get an idea of how the Liberals are handling this issue. There is no way they can vet 1000 non documented people a day. Who is selecting them as ‘refugees’?)

Related: Up to 900 Syrian refugees a day to land in Toronto, Montreal: document

As many as 900 Syrian refugees could land each day in Toronto and Montreal starting as early as Dec. 1, according to a government document obtained by CTV News.

“Operation Syrian Refugees” shows the majority of the Syrians will come from camps in Lebanon, Jordan and perhaps Turkey.

(Is there any way that these German Jewish people can come to Canada and the US and lecture Jewish groups here that are determined to enforce cultural Marxism uber alles and threaten the existence of the diaspora as a whole in the Americas?)

The Central Council of Jews in Germany called Monday for a limit to the migrant influx because of problems with integrating the mainly Muslim newcomers, earning a quick rebuke from a pro-refugee charity.

Chancellor Angela Merkel’s government has opened the doors to asylum seekers fleeing conflict in Syria, and arrivals from the war-torn country and other trouble spots are expected to reach one million this year.

“Sooner or later we won’t have a choice but to set an upper limit,” the council’s president Josef Schuster told Die Welt daily.

“Many of the refugees are fleeing the terror of the Islamic State and want to live in peace and freedom, but at the same time they come from cultures where hatred of Jews and intolerance are an integral part.

(Good luck playing the gay card. Homosexuals and women are more loyal to Marx than to their own well being by any measure)

Westmount collegiate in Thornhill, Ontario was evacuated Monday morning, November 23, as a precaution following a possible threat. The neighborouhods surrounding the school are known as predominantly Jewish.

Police condoned off the school complex and conducted a thorough search inside its premises. Police and CTV helicopters were hovering the sky and two fire trucks were deployed in the area.

Update: Around noon after almost three hours, the Police determined that the school is safe, wrapped up its operations and the students started returning to the school.

In recent years several incidents of spray-painted anti-Semitic graffiti were reported in Vaughan. On October 31, 2015, unknown individual(s) spray-painted on Saturday () the word “Jews” on a sign placed by the Parks and Forestry Department of the City of Vaughan, Ontario at Concord/ Thornhill Regional Park located at 299 Racco Parkway.

10. Obama out of touch with the nature of the threat

11. Prince Charles is selling a pudding and kool aid combo package at a deep discount

Prince Charles has said that he thinks the Syrian civil war was started partly due to a drought in the region six years ago, which he blames on climate change.

12. IDF soldier stabbed and killed in terror attack on Route 443, north of Jerusalem 13.  Muslim migrant combines anger and sorrow for the cameras while warning others to shut up lest they blow his act.

14. A Swedish organization makes a ‘Not Welcome to Sweden’ add in English to discourage the migrant hordes. (Facebook video)

Thank you Dan F., M., Nicolai Sennels, CB Sashenka, Gates of Vienna, M., and all. Its already a busy day even if just a hang over from yesterday. But today brings its own new set of horrors and revelations.

10 Replies to “The degree to which our cultures have been subverted and neutered is staggering. Canada and the US are about to undergo massive change: Links 2 on Nov. 22 – 2015”