A SECRET Government report leaked to a German newspaper reveals how authorities have kept the true number of refugees pouring into the country down and that a mammoth 1.5 million – any maybe more – are expected this year. It also predicted an increasing – perhaps even intolerable – strain on resources to deal with them all as the right for individuals to bring in family members if they are granted asylum could swell arrivals in the next two years to over seven million.

As social tensions rise and asylum centres are torched by neo-Nazis, Bild newspaper revealed on Monday that authorities reckon on 920,000 people arriving in the last three months of this year.

2. A couple of clips from Australia rolled into one

3. Ham Sandwiches And Sausage Rolls May Be Banned From Office Kitchens For Being ‘Offensive’

Kitchens that are shared between office workers may soon be banned from storing pork products like sausage rolls over fears that they are “offensive”.

New guidelines proposed by interfaith group CoExist House say that employers should consider worker’s religions before allowing ham sandwiches placed in the fridge alongside other products.

The group also suggests that alcohol should not be served at corporate events in case it upsets members of certain faiths.

Andy Dinham, professor of faith and public policy at Goldsmiths, University of London, is writing up the guidelines that will be put forward to employers this week.

(I have an alternate suggestion…)

4. Islamic father is arrested for ‘beating his four-year-old daughter to death’ because she did not cover her head while she ate lunch

A man has been arrested and accused of killing his four-year-old daughter because she did not notice her head scarf slip from her head while eating lunch.

Jafar Hussain, from the town of Bareilly, in Uttar Pradesh, India, is alleged to have killed his daughter Farheen by repeatedly throwing her against the ground after he flew into a rage.

According to The Hindustan Times, his wife – who is also the girl’s mother – attempted to intervene but was unable to stop the killing and suffered a beating herself.

5. End of ISIS? Putin ‘sending 150,000 soldiers to Syria to WIPE OUT evil Islamic State’
(Of course that can’t possibly work. The only thing that does work against the Islamic State is to slip them weapons via the Libyan embassy, training people who defect to them with billions in money and weapons and training, and playing golf. Everyone knows that! Putin is in for a big surprise I bet!)

The Russian leader is reportedly mounting an enormous military mission to take control of the terror group’s stronghold of Raqqa.

The city is the self-declared capital of ISIS in Syria and is patrolled by as many as 5,000 jihadi members.

Putin is set to mobilise 150,000 reservists who he conscripted into the military earlier this week

7. U.S. Aims to Put More Pressure on ISIS in Syria 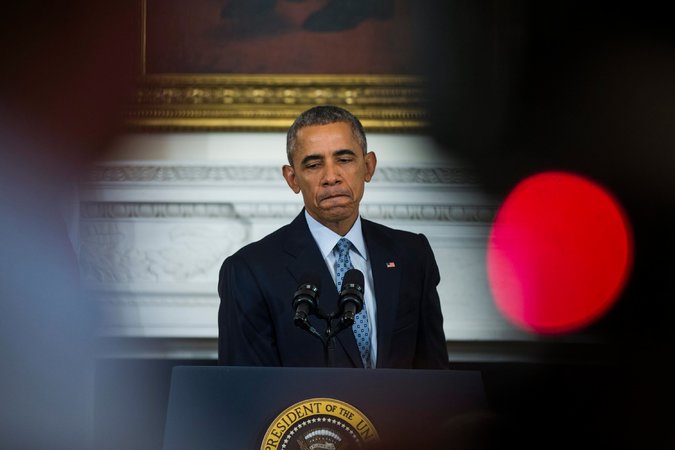 (And the New York Times would never participate in a lie, right?)

WASHINGTON — The American-led coalition fighting the Islamic State has begun preparing to open a major front in northeastern Syria, aiming to put pressure on Raqqa, the terrorist group’s de facto capital, according to military and administration officials.

President Obama last week approved two important steps to set the offensive in motion over the coming weeks, officials said. Mr. Obama ordered the Pentagon, for the first time, to directly provide ammunition and perhaps some weapons to Syrian opposition forces on the ground. He also endorsed the idea for an increased air campaign from an air base in Turkey, although important details still need to be worked out.

Together, these measures are intended to empower 3,000 to 5,000 Arab fighters who would join more than 20,000 Kurdish combatants in an offensive backed by dozens of coalition warplanes to pressure Raqqa, the Islamic State’s main stronghold in Syria. Plans are also moving forward to have Syrian opposition fighters seal an important 60-mile part of the country’s border with Turkey to cut off critical supply lines of the Islamic State, also known as ISIS or ISIL.

(All this will amount to what it always does. A whole bunch more trained and armed people joining the Islamic State)

8. Russia flips the bird at Turkey and NATO by ignoring Turkish airspace with its jets.

8 Replies to “Nine very important items, each of which are indicative or conclusive of bad bad things. Links 1 on Oct. 5 – 2015”