(Seeing as how every attack at a US college or base has literally been inside an official “Gun Free Zone” I think this is not a brilliant idea, just one that is so blatantly obvious that escaping the idiocy of Canadian, American and British strategies of disarming ourselves seems like genius) 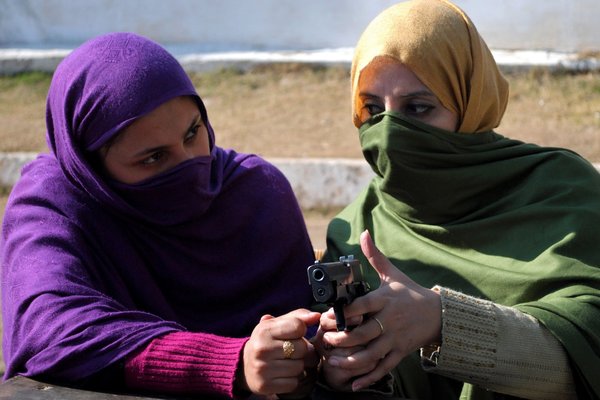 PESHAWAR, Pakistan — Gunfire rang out as Fatima Bibi squeezed off three shots, hitting her target every time. Then she lowered her Glock pistol, turned to her fellow academics and smiled.

Her instructor was smiling, too.

“These ladies are better shots than some of our men,” said Abdul Latif, a police firearms instructor. “They learned to handle a gun in just two days. Their confidence level is remarkable.”

Dangerous times call for unusual measures in northwestern Pakistan, where the police are offering firearms instruction to schoolteachers and university lecturers since the Taliban massacred 150 people at a Peshawar school in December.

Ms. Bibi was one of eight lecturers from the Frontier College for Women, a postgraduate college, who attended a two-day firearms course at the provincial police firing range last week.

2. Ezra Levant – CanadianJihad.ca – For the media too lazy to report on the jihad in Canada

(My guess is Ezra claims the media is “too lazy” to avoid what he likely thinks, which is that the media is too afraid or in fact, on board with them one way or another)

A massive blaze has ripped through an Islamic community center in Houston, Texas, on Friday, local media reported.

It is not known what has caused the fire that gutted a section of the building used for storage. Federal investigators are now looking for the source of the blaze, ABC News reported.

(As it is extremely likely that this fire started from incendiary or explosive materials kept at the mosque for a future attack, the chances are will never hear anything about this again and the case will be closed like Greely, Minneapolis, NYC water treatment, Boston water reservoir and about a hundred others we know about and a thousand other ones we dont. More here)

4. Islamic State prisoners on display, no doubt being taken to their UN approved, Geneva Convention regulation PoW camps where they are awaiting their packages from the Red Cross.

5. Kelly McParland: Stephen Harper may be wrong about Zunera Ishaq. But he’s right about Canadians

Thank you M., Richard, Grace, Don C. and many many more. More to come shortly.