1. Here is a great French video report about how the sharia is being enforced in Raqqa Syria. While this appears to be a fairly new report, I strongly recommend seeing this video done by another French journalist about how sharia, or as I like to call it, ‘The Pirate’s Code’, was being forced on the conquered people of other Syrian towns by US allies in 2013, well before the Caliphate was declared this spring.

2. The Muslim Brotherhood Launches it’s own Political Party in US, Just In Time for 2016

Muslim voters have the potential to be swing voters in 2016,” said Nihad Awad in launching the benign-sounding U.S. Council of Muslim Organizations, whose membership reads like a Who’s Who of Brotherhood front groups.

“We are aiming to bring more participation from the Muslim community.”

USCMO also aims to elect Islamists in Washington, with the ultimate objective of “institutionalizing policies” favorable to Islamists — that is, Shariah law.

This development bears careful monitoring in light of the U.S. Brotherhood’s recently exposed goal to wage a “civilization jihad” against America that explicitly calls for infiltrating the U.S. political system and “destroying (it) from within.”

Dr Steven E. Koonin (inset) was Undersecretary for Science in the Energy Department during Obama’s first term. Koonin is sceptical about the alarmist case, so much so that he calls for serious independent reviews of the IPCC’s forecasts and methodology, along with a close look at other scientists’ prognostications.

4. Gates of Vienna post on the Ottawa Bomber who was planning to detonate over 50 bombs he was assembling.

5. Another good editorial on the change that took place once the Caliphate was declared.

6. Yet another attack on a dog shelter in the UK! and in the same month as the fire that killed so many dogs in the giant fire in England just a week or so ago! (Sept. 14-2014) What could possibly be behind all this arson at dog shelters? 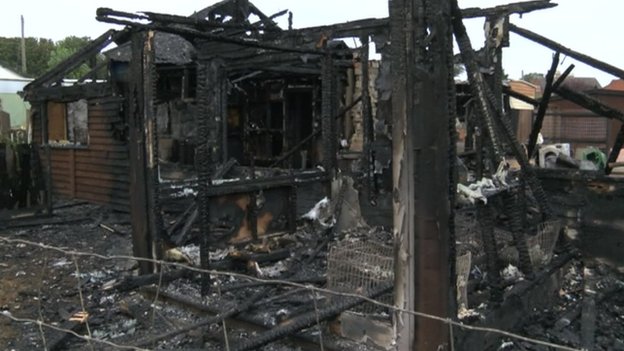 The animals were all in cages, so were unable to escape from the blaze

Twenty dogs have died in their cages after a house caught fire in East Yorkshire.

The dogs were owned by private breeders who returned to their home in Graingers Road, Hornsea, to find it well alight with the dogs inside, police said.

The animals were all in cages, so were unable to escape from the blaze, which started just before 19:00 on Saturday.

Dozens of traders at a rural market in Borno State may have been killed and several others injured during an attack by Boko Haram members yesterday afternoon, eyewitnesses and security operatives have said.

Also, gunmen in army and police uniforms, suspected to be cattle rustlers, yesterday at about 12 pm stormed Tadabale Village in Isa local government area in Sokoto State, killing two people and making away with over 8000 livestock, locals confirmed to LEADERSHIP Weekend.

8. It is time we profiled Muslims:

9. Have a good listen to what this British journalist has to say before he was captured by the Islamic State and then ask yourself if the British Government should enrich the terrorist group by paying a ransom to get him back.

10. PRISON officers in riot gear have used tear gas to control maximum security inmates who tore apart Goulburn Jail in a racially fuelled riot ­described as the biggest in 10 years.

With shouts of “Allah Akbar”, prisoners armed with homemade weapons threatened guards and smashed through an internal fence at the state’s toughest jail, which was in lockdown yesterday.

11. “The vast majority of Muslims live in peace” Really? Where?

Islam’s apologists are never shy to admonish that the terrorists of ISIS or Al Qaeda etc are only a small minority that have misunderstood Islam.  The “vast majority of Muslims live in peace” we are told, over and over again like an insane drumbeat.

But where exactly does this Pax Islamist reign and what kind of peace is it that these Muslims live under?

Is it the peace that persecutes religious and ethnic minorities in virtually every Muslim nation you would care to name? A persecution often enshrined in law and commanded by the Koran.

Of the Top 50 Christian persecuting nations, 37 are Muslim majority states.