An alleged plot by Islamic fundamentalists to take over Birmingham schools by ousting headteachers and staff through dirty tricks campaigns is being investigated by education chiefs.

The city council and the Birmingham Mail have received documents which purport to show Jihadists are targeting schools and orchestrating false allegations against staff, including non-Muslims, in an operation dubbed Trojan Horse.

Meanwhile, West Midlands Police have reopened a fraud investigation at one school named in the supposed leaked letter – and Ofsted is currently conducting a snap inspection at another.

A symposium in Melbourne on the supposed threat posed to democracy by Islam has been used to discuss formation of a new anti-Islamic political party.

The party has the backing of Dutch right-wing politician Geert Wilders who says the new party will officially be launched in Australia in 2015.

News of the party’s debut has been condemned by both the Coalition government and the Labor Party as well as human rights activists.

3. Man suspected of terror training in Syria held at Gatwick

A 21-year-old man suspected of undergoing terror training in Syria was arrested at Gatwick airport as he returned home.

Counter-terrorism officers held the man as he got off a flight from Istanbul in Turkey, which is a well established route for people getting in to and out of the war-torn country.

He was arrested under the 2006 Terrorism Act and was being questioned at a west London police station.

5. Sultan of Brunei hits back at foreign criticism of looming implementation of Sharia law that will introduce amputations and stonings as punishments

Starting in April, Brunei will begin implementing a version of Sharia that allows for penalties such as amputation for theft and stoning for adultery. 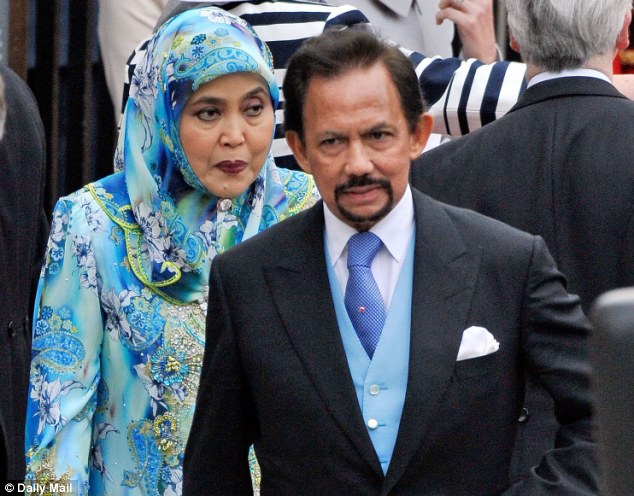 Islamic law: Sultan Hassanal Bolkiah, pictured with his wife at the wedding of the Duke and Duchess of Cambridge, said all races should unite under Sharia law, and that it is a great achievement for Brunei to implement it

Under limited circumstances, punishments can be applied to non-Muslim residents of the oil-rich country, according to those who have seen the law.

Public criticism of the government is extremely rare in the country, but some citizens have turned to the Internet to express alarm at the law. […] Around one-third of Brunei’s 440,000 people are non-Muslims, mostly Christian or Buddhist Chinese.

Thank you EDL Buck, UK Pete and all. Much more to come today. I am going to try and make an actual page for the sex-slaving pedophile muslim gangs so it will always be easy to find, and then take it off the front post soon.