(No reason that should interfere with Obama’s great Chamberlain-moment though is there?)

3. What happens in Vegas DOESN’T stay in Vegas with new street lights that can record your conversations

4. Someone went to some trouble to make this item to take this picture. 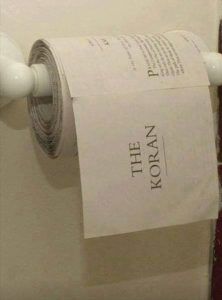 The thing is, we don’t need it. But it might be a riot over at Guantanamo.

5. There is quite a bit of kerfuffle over the banning of islam and knocking down of mosques in Angola. Lots of people are saying it isn’t true. As far as I can tell, it is true but it isn’t news. This was a policy as of 2006. What is interesting though is that the Angola embassy in Washington is denying it. But only that one. Hey anyone know what the US foreign aid budget to Angola is?

(To understand why this is problematic, here is a 10 part documentary by Frank Gaffney explaining it in detail)

8. Please try and find the time to listen to at least the audio portion of this BBC interview between Melanie Phillips and Lord Phillips of Sudbury on the Iranian deal. Both sides are well stated.

Thank you Richard, M, Taffy in Canada, Fjordman and all who sent in links.