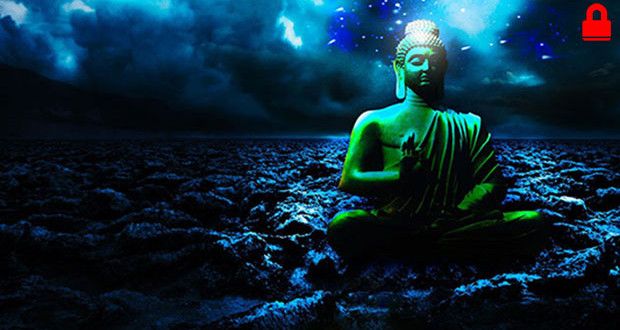 If the subject of this article had been similarities between Buddhism and Islam, it would have stopped right here.

Except that both are listed as religions, they are totally different in their thinking, approach, values, goals and behavior throughout history. Their view of the human being and the meaning of an exemplary life could not be more different.

Let us begin with Buddhism’s guiding views and the examples it has set. Buddhism ­ as scientists have proven through their experiments ­teaches that space is information and that all beings are therefore holders of truth and can enter the blissful states of liberation and final enlightenment, also called Buddhahood. It is based on experience, analysis and free choice and proves that perfection is our deepest and timeless nature and that it can be reached by all.

The steps towards that state begin with the realization that which constantly changes cannot be a real ”me” or self. Adopting this view may at first feel like falling into a black hole but is actually the best of liberating news:

As the only lasting, timeless and all-pervasive quality is the space-awareness of our experiencing mind, life is a gift. Mind is not ”something” but indestructible and conscious space. It has not been created or born and its naked awareness is timeless and can be totally relied upon.
This means that everyone is a potential Buddha and can attain perfection. The first result of this insight is called liberation. Upon this follows the second step ­– the rejection of materialism and nihilism.

Form is emptiness, emptiness is form, form and emptiness cannot be separated ­– a view proven by advanced science today. With this second veil removed, enlightent ­ mind’s all-seeing compassionate and blissful expression through body, speech and mind ­ has been reached, working throughout history for the benefit of all.

The word Islam is Arabic and means submission. It represents the complete and total opposite to any teachings of responsibility for others and enlightenment for the benefit of all.
There are also persistent questions about the origins of Buddhism and Islam. While the life of the Buddha Sakyamuni Gautama is historically proven by sources from his own time, there are no contemporary sources confirming Muhammed’s existence.

Sakyamuni Gautama was born 2601 years ago at Lumbini in what is today south-central Nepal, grew up and reached enlightenment at the age of 35 in today’s northern India. He taught there till he died at the age of 80.

Ultimately important, however, must be what religious teachers have contributed to happiness or pain throughout history. Till this day Muslims consider it necessary to kill thousands in order to uphold the teachings of Islam. Such behavior is seen as righteous and a way to please and imitate their prophet.

Throughout history Buddhists have been only too willing to look away from such abuse, trust in the basic good nature of other cultures and give them the benefit of any possible doubt. Mohammed personally killed a great number of people and had others executed.
Buddha warned against harming even the smallest insect and taught the laws of Karma to discourage harmful activity and protect both sides in a conflict. Although trained as an elite soldier up to his 29th year, we hear of nothing violent from him.

The general Buddhist aim, the development of mind’s potential, calls for functioning societies with free speech and little violence. That all beings are potentially Buddhas and should be aided in recognizing this great bliss and freedom has however historically created dangerously unprotected societies ­– often with fatal consequences. From year 800 and till the burning of the great Buddhist university in Nalanda in 1193, Muslim invasions of unprotected Buddhist societies is estimated to have cost the lives of 80 million people and massive destruction of culture.

Towns in the path of the conquering Turkish or Arabian forces were given a choice: If you convert to Islam today, you will live, if not half will be killed and the rest sold as slaves. Worldwide, Islam is credited with the killing over 270 million non-Muslims over 1400 years.

Kindness is not a Muslim virtue ­but regarded as a sign of weakness.
(The author is a prominent religious leader and in keeping with Buddhist
tradition does not want to be associated with current political conflicts.)

10 Replies to “Kindness is not a Muslim virtue”