I hope Obama has enough swords for all of his friends to fall on. 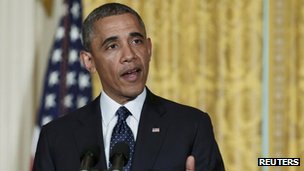 The head of the US tax agency has quit after it emerged his staff singled out conservative groups for extra scrutiny, President Barack Obama has announced.

The scandal has been one of several to rattle the White House in recent days.

In a short statement, Mr Obama said he would work with Congress in further investigations of the IRS matter.

One Reply to “IRS commissioner quits over conservative tax scrutiny”