As Europe descends into dark-ages, superstitious barbarity at a speed even Chuck Yeager would fear to travel. At least with Catholic ones it generates a lot of really great entertainment and Halloween ideas. Not to mention that its rare and they look for the medical option first. At this stage, I am damn nearly ready to declare the enlightenment officially over.

The British exorcists: How people are paying thousands of pounds to quack ‘healers’ because it’s more acceptable to be possessed than to have a mental illness

Hundreds of British Asians are operating as healers, blaming the supernatural for mental health problems and charging sometimes thousands of pounds a session to remove evil spirits from bodies believed to be possessed.

An exorcist operating in east London has said the demons can ‘deceive doctors’ and research by BBC’s Newsnight has found that some communities are finding it more acceptable to be possessed than mentally ill. 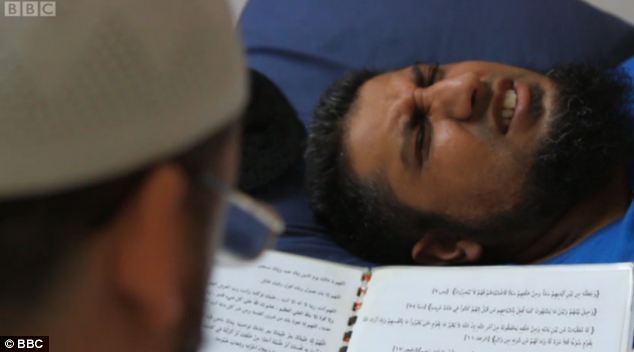 Exorcism: Mudasar Khan, pictured, believes a Jinn is causing his panic attacks and depression. An exorcism is pictured being performed where the exorcist reads passages from the Qur’an

The evil spirit – commonly known as a bad Jinn in Asian communities – is removed by a healer reading passages from the Qur’an.

There is a theological grounding for Muslim’s belief in evil spirits as the concept of Jinn is in the Qur’an – though what Jinn actually is, is not universally agreed upon.

An exorcism is the religious practice of evicting demons or other spiritual entities from a person which they are believed to have possessed.

Communities of British Asians are blaming the supernatural for mental health problems, according to research by Warwick University.

The supernatural is also being blamed in some cases for criminal activity and even not getting a job.

This one is funnier. I think the djinn in this case may have been a dentist

8 Replies to “Hundreds of exorcisms performed in East London every year. And not even one decent movie.”