Translated from German by Michael Laudahn:

From THIS German language news site 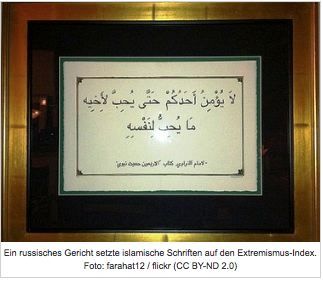 A court in the south russian city of Orenburg  has established a list of prohibited litterature comprising 65 islamic books, whose sale henceforth is illegal on russian territory. The verdict caused great outrage with the russian moslem community. The court classified the islamic publications as ‘extremist’. In Orenburg, there is a minority of moslem faith, until 1925 the entire district was part of the kazakh soviet republic. Today, Orenburg is situated near the Kazakhstan border, where more than 70 percent of the population are moslems.

Among the islamic litterature classified as dangerous are the well-known al-Bukhari and al-Muslim hadith collections, like also the books on the life of the prophet Mohammed (sirah) and the 40 hadiths of the imam An-Nawawi. A typical and verdict-causing text sample from the Sahih hadith goes like this:

[…] When the Messenger of Allah (may peace be upon him) appointed anyone as leader of an army or detachment he would especially exhort him to fear Allah and to be good to the Muslims who were with him. He would say: Fight in the name of Allah and in the way of Allah. Fight against those who disbelieve in Allah. Make a holy war, do not embezzle the spoils; do not break your pledge […] If they refuse to accept Islam, demand from them the Jizya. If they agree to pay, accept it from them and hold off your hands. If they refuse to pay the tax, seek Allah’s help and fight them. […] (Sahih Muslim 19:4294) [excerpt copied from http://wikiislam.net/wiki/Qur%27an,_Hadith_and_Scholars:Jizyah

The forbiddance caused sheer horror with the moslem community in Russia. The Mufti Council of Russia, the Central Office of the Islamic Congregation, the Moslem Coordination Centre for the Caucasus and more islamic institutions condemned the court’s decision sharply. The associations intend to appeal against the Orenburg court decision. Should the court’s decision be upheld, this could lead to a disgruntlement within the moslem community and beyond that to riots. Russia’s human-rights ombudsman, Vladimir Lukin, declared: ‘The fight against terrorism is a fight against the real planning of terror acts and the establishing of groups, not against the interpretation of old and holy books, no matter what persuasion.’ As the writings prohibited are part of classic islam, a forbiddance would be equivalent of a closure of all moslem libraries.

This decision is not the first one taking on religious litterature. Earlier, 68 Jehova’s Witnesses publications and 15 oeuvres of the late islamic theologian Said Nursi were classified dangerous and put on the federal list of extremist material, which means it is illegal to spread them or store them for spreading. Since november 2011, blocking the Jehova’s Witnesses’ website has been intensified. In december 2011, Russia’s ambassador to India apologised for the attempt to prohibit the book ‘Bhagavad Gita as it is’ in Russia for being extremist. It is of paramount significance for Hare-Krishna movement partisans. ‘It is not normal to send religious books to ignorants to have them checked’, added the ambassador, thereby expressing sharp criticism at the Tomsk (Siberia) University’s expert witnesses, who had classified the book as extremist.