Headstones on World War Two military graves in Libya have been desecrated in the second such attack in four months.

The latest vandalism occurred in a cemetery in Benghazi, the starting point of last year’s uprising that ended Colonel Gaddafi’s dictatorship.

Earlier this year, Libya’s leadership apologised after graves of British and Italian troops were smashed in another Benghazi cemetery, by what were  believed to be Muslim extremists. 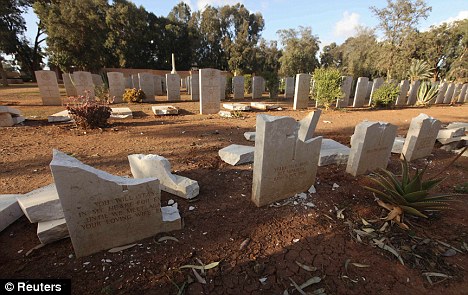 Gravestones damaged in Benghazi Military Cemetery back in February

The site was near where British troops fought the Germans and Italians during the Second World War.

One man was heard saying: ‘This is a grave of a Christian.’

Of the latest attacks, a council spokesman said: ‘We don’t know yet who did this. We have spoken to the security committee about investigating.’ 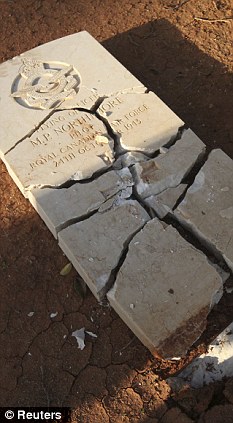 A gravestone is seen damaged by an Islamist group in protest at the burning of the Koran by U.S.

‘This cemetery has been here for decades and nothing like this has ever happened before.’

Benghazi is now a hot spot for violence with arms readily available and state security forces struggling to assert their authority.

A convoy carrying Britain’s ambassador to Libya was hit by a rocket-propelled grenade on Monday, wounding two of his bodyguards.

Five days before that, an explosive device was dropped from a passing car outside the offices of the U.S. diplomatic mission in Benghazi.

The blast that followed slightly damaged the gate in front of the building.

Earlier attacks targeted the International Committee of the Red Cross and a convoy carrying the United Nations envoy to Libya.

Security experts say the area around the city is host to a number of Islamist militant groups opposed to any Western presence in Muslim countries.