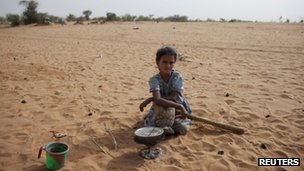 More than 300,000 people have fled northern Mali due to the rebellion
Continue reading the main story

Two rebel groups that seized northern Mali two months ago have agreed to merge and turn their territory into an Islamist state, both sides say.

The Tuareg MNLA, a secular rebel group, and the Islamist group Ansar Dine signed the deal in the town of Gao, spokespeople said.

Ansar Dine, which has ties to al-Qaeda, has already begun to impose Sharia law in some towns.

The groups took advantage of a coup in March to seize the territory.

Correspondents say the deal is yet another worrying development for Mali and may complicate efforts to stabilise the country.

Capt Amadou Sanogo seized power in March after claiming the then president, Amadou Toumani Toure, was not doing enough to quash the rebellion.

Faced with mounting international pressure and sanctions, he was forced to step down only three weeks later, but is still thought to wield power behind the scenes.

Mali coup: The story so far

“It is true that an accord has been signed,” Col Bouna Ag Attayoub, a MNLA commander in Timbuktu, told the BBC. “The Islamic Republic of Azawad is now an independent sovereign state.”