US military course taught officers ‘Islam is the enemy’: 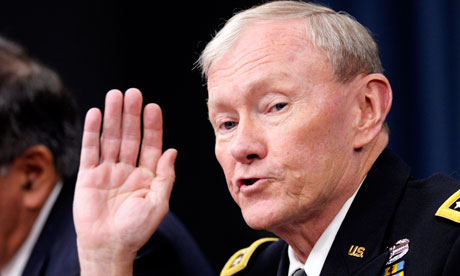 General Martin Dempsey speaks during a briefing at the Pentagon. The course was suspended when a student objected to the material. Photograph: Susan Walsh/AP

A course for US military officers has been teaching that America’s enemy is Islam in general and suggesting that the country might ultimately have to obliterate the Islamic holy cities of Mecca and Medina without regard for civilian deaths, following second world war precedents of the nuclear attack on Hiroshima.

The Pentagon suspended the course in late April when a student objected to the material. The FBI also changed some agent training last year after discovering that it, too, was critical of Islam.

The teaching in the military course was counter to repeated assertions by US officials over the past decade that America is at war against Islamic extremists, not the religion itself.

“They hate everything you stand for and will never coexist with you, unless you submit,” the instructor, Lieutenant Colonel Matthew Dooley, said in a presentation last July for the course at Joint Forces Staff College in Norfolk, Virginia. The college, for professional military members, teaches mid-level officers and government civilians on subjects related to planning and executing war.

Dooley also presumed, for the purposes of his theoretical war plan, that the Geneva conventions that set standards of armed conflict, are “no longer relevant”.

He adds: “This would leave open the option once again of taking war to a civilian population wherever necessary (the historical precedents of Dresden, Tokyo, Hiroshima, Nagasaki being applicable to the Mecca and Medina destruction decision point).”

6 Replies to “Some in the U.S.A. clearly are able to see their hand in front of their faces.”