Dear friends of this site…

Michael Coren, who by far is the most courageous of broadcast media in Canada alongside Lowell Green, who had Kurt Westergaard on his show in 2009 shortly after the cartoon riots, who has never shied away from speaking his truth and the facts on the ground of the nature of Islam, has released a new book on the myths of Christianity and the treatment of Christians world wide.

Unlike the Jews who at least have the much-beleaguered Israel as a bulwark, there is no state for the Christian people, even if there are many post-Chrisitan nations. No state on earth where Christians can be guaranteed their right to their beliefs and the freedom to practice openly and in safety. There are however, 56 nations in the Organization of Islamic Cooperation, (even if a few of them aren’t Muslim so much as general despotisms like North Korea)

While I have not personally read this book yet, (A review should be up on Vlad soon by our resident book reviewer, People of Shambala) I would ask those of you who are able to please support Michael and support Christianity overall by buying this book..

Here is the description at Amazon: 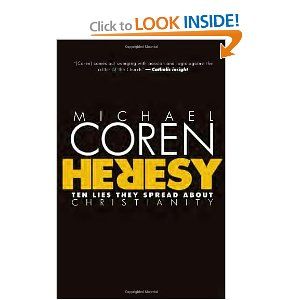 Michael Coren explores why and how Christians and Christian ideas are caricatured in popular media as well as in sophisticated society. He takes on, and debunks, ten great myths about Christianity: that it supports slavery, is racist, sexist, homophobic, anti-intellectual, anti-Semitic, provokes war, resists progress, and is repressive and irrelevant. In a climate that is increasingly as ignorant of Christianity as it is good at condemning it, Coren gives historical background, provides examples of how these attacks are made, and explains the reality of the Christian response, outlining authentic Christian beliefs.

There are few more important topics and even fewer more courageous authors and TV personalities than Mr. Coren. If we cannot support those who openly and plainly speak the truth when truth is heresy, then we lose the right to complain when we do not hear it spoken.