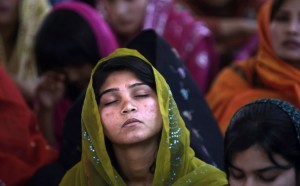 Hindu women in Pakistan are being pressured into converting to Islam, says AsiaNews.it. The conversions are forced through “violence and coercion. [And] Looming in the background is the blasphemy law, seen by many as the most serious obstacle to social and cultural equality.”

Forced conversions of Hindu girls and women are nothing new, although they have been getting more attention lately due to the high profile abduction of Rinkle Kumari and the high profile of some of those involved in the crime. Rinkle, a 17-year-old Hindu girl, was violently attacked and kidnapped by a mob of Muslim men, “with the help of a member of the [local government] National Assembly,” reports the Asian Human Rights Commission (AHRC). Local “Muslim fundamentalist groups” were also involved. “Following her abduction,” says the AHRC, “she was forced to embrace Islam.”

“Naveed Shah, a member of a famous criminal group of Hassam Kalwarh, along with more than dozen persons abducted Kumari from her house on 23 February,” says the AHRC. “They kidnapped her at gunpoint and took her to… read more.

2 Replies to “Madrasah involved in kidnap wants to “target” 2,000 Hindu girls to Islam every year”