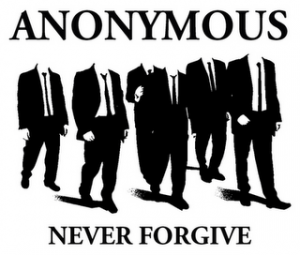 Has the internet protest movement Anonymous gone too far? Well, let’s put it this way: according to media reports, Anonymous’s new online campaign uses spamming. Worse still, click on an innocent looking link from a friend, and you might go to jail. Ignorance, it turns out, is no defense when it comes to “cyber war.”

Perhaps it started innocently enough, with people protesting Scientology while wearing the Guy Fawkes mask as seen in the movie V for Vendetta.

A loose network of “hactivists,” Anonymous has supported Wikileaks and democracy protests in the Middle East. But it’s also attempted to hack Facebook — and promises to achieve that goal this year, and to steal account information along with it. And, it also recently hacked the security info site, Stratfor, stealing bank account numbers and cash from those accounts, which it then gave to charities, we’re told.

As European Son reported in November 2011, one Anonymous group also attacked Muslim Brotherhood websites. Anti-MB types might applaud, but the Anonymous hactivists also accused the MB of copying Freemasonry. Whenever you hear “Freemasonry”mentioned in Islamic or Middle Eastern circles you know that the speakers have absorbed the “Zionist Masonic” conspiracy theory of the… read more.

One Reply to “Anonymous might get you thrown in jail”