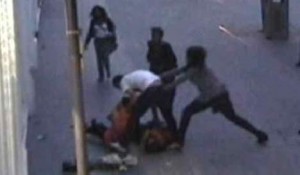 Rhea Page savagely attacked by a gang of Muslim girls.

Is it appropriate for a judge to suspend a sentence of a convicted, violent criminal – so that he can walk free instead of serving time – if the criminal is “religious”?

In early 2010 Cherie Blair Q.C., wife of Prime Minister Tony Blair, suspended the sentence of Shamso Miah, who had assaulted and injured a man.

According to the police, on the day of the incident Miah, a Muslim, had left a mosque, and gone to a local bank, where he became embroiled in a disagreement with another man, Mohammed Furcan, whom he then punched in the face. Furcan chased Miah outside and demanded to know why he had been assaulted, at which point Miah punched him to the ground, breaking his jaw. Miah claimed that he had acted in self-defense, but security cameras at the bank showed this to be a lie.

“I am going to suspend this sentence for the period of two years,” Blair told Miah at sentencing, “based on the fact you are a religious person and have not been in trouble before.”

Terry Sanderson of the National Secular Society told the Daily Mail that “we strongly feel that this kind of consideration [for a felon’s religion] should not play any part in sentencing. The idea that someone who is religious gets a lighter sentence is outrageous.”

For several decades – especially over the last ten years – British authorities have placed “community cohesion” over equality before the law. Roughly translated, “community cohesion” means that cultures have a higher priority than people. If a policy – or actions — by an authority might possibly “offend” some of the louder members of a… read more.