Mirrored from the Gates of Vienna,

This afternoon a group of English Defence League leaders gathered at a venue in the West Midlands for an organizational meeting. Gaia was in attendance, and sends the following report:

The main topic of his talk was a future relationship between the EDL and the British Freedom Party, which recently elected Paul Weston as its chairman.

The atmosphere was definitely upbeat, and Tommy had the full attention of the assembled group during his talk. The crowd of 250-300 listened attentively and applauded from time to time. He explained that the EDL need to move up a notch — they cannot go on forever staging street demos. They are still widely perceived as a rabble, and as such cannot possibly obtain funding or be taken seriously by the political class.

He said that it has become imperative that the EDL gather political clout.

With that end in mind, he proposed an association between the EDL and BF. He had nothing but praise for Paul Weston, “who has charisma, can speak well, and is a jolly good bloke!” He said they got on well with each other and could work together.

Tommy also mentioned Paul’s courage in putting his life on the line to front this party. He reminded the audience that the UK, unlike many other countries in Europe, do not have any party that takes a stance against Islamisation. He emphasised that Paul alone cannot galvanise the support of the large numbers of working-class people, and this is where the EDL can lend their weight.

By the end of the meeting, there was general agreement among those assembled that this was the way to go.

Tommy’s idea was that there should be no more EDL demos this year. In the new year, however, there will be a series of small demos in several towns. These will be followed by a massive demo in Luton sometime in March to commemorate the third anniversary of the insulting by radical Muslims of the returning Royal Anglian Regiment. This is a significant date for the movement, as it was the causative event which inspired the founding of the English Defence League.

Sometime after that, Tommy may elect to join British Freedom, but this is an opportunity for EDL members to move over to BF and for the first time provide input and promote the views of the British working class within a British political party. The EDL will utilise their divisional structure to support British Freedom. This is important, because the working class have been betrayed by the Labour Party. 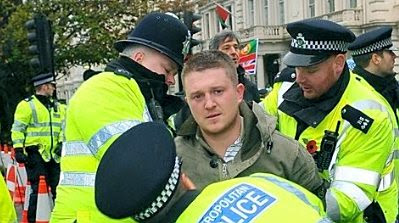 There followed a lengthy question and answer session, which Tommy fielded with great aplomb. Some members expressed concern about the different issues facing EDL divisions in widely separated regions of the country. Tommy replied that he does not consider himself the leader. If the Regional Organiser in, say Newcastle, wants to speak out in the media for his division, he should go ahead. Tommy added that some of his best colleagues were from the North.

After the meeting I spoke to a fellow from a mining village in Durham who had travelled for four hours to get there, and he said as far as he is concerned there is no north/south divide, and that Tommy is his hero.

One Reply to “THE ENGLISH DEFENSE LEAGUE AND BRITISH FREEDOM”