Part of the article from:

Amsterdam: Police looking for youth who threatened to kill a man for not fasting on Ramadan 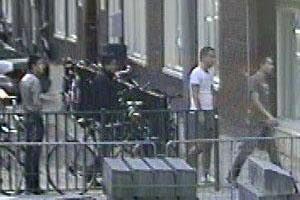 The Amsterdam police published photos of a group of youth who threatened to kill a man in Amsterdam-West last August because he did not fast on Ramadan. The group shouted at the man that they’ll shoot him in the head, the police reported Monday.

One Reply to “Amsterdam: Police looking for youth who threatened to kill a man for not fasting on Ramadan”