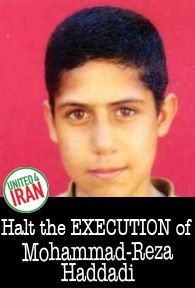 now)20-year-old Mohammad Reza Haddadi has been scheduled in the city of Shiraz, southern Iran.  He has been sentenced to death for a crime he allegedly committed while under the age of 18. This is the third time his execution has been scheduled.

Please Sign this petition to Halt the hanging of Mohammad Reza Haddadi, convicted at age 15!  http://www.gopetition.com/petition/40665.html

Background:
Send a letter calling on the IRI’s authorities to halt the imminent execution of Mohammad Reza Haddadi, who could face death by hanging as soon as 7 July 2010 for allegedly committing a murder when he was 15 years old. His family was told by judicial officials on 4 July 2010 that they should arrange a last visit to their son before becing executed in Adelabad prison in Shiraz.
Mohammad Reza Haddadi was sentenced to death in 2004 for the murder of Mohammad Bagher. He confessed to the killing initially, but during the trial he retracted this confession, saying that he’d made the confession because his two co-accused said they would give his family money if he did so. Mohammad then denied having taken part in the murder, and there are reports of his co-defendants supporting his claims of innocence and withdrawing their testimony implicating him in murder.

The execution of juvenile offenders is prohibited under international law, including Article 6(5) of the International Covenant on Civil and Political Rights (ICCPR) and the Convention on the Rights of the Child, to which the IRI is signatory.Read more about Mohammad Reza Haddadi’s case: http://www.amnesty.org.uk/news_details.asp?NewsID=18864

Directions:
When writing a letter, please be polite, present facts, and keep the content of the letter human rights focused. Below the letter you’ll find personal fields to fill out. Enter as much information as you feel comfortable. A VALID e-mail address is required; however, if you don’t feel comfortable sharing your e-mail, consider making an e-mail account just to use for actions like this. To the right are the targets of the e-mail, which includes officials inside the IRI, various IRI embassies, and UN officials.

If you have any questions, please send an e-mail to [email protected]

7 Replies to “Iran:Halt the Execution of Mohammad Reza Haddadi, convicted to death as a minor!”