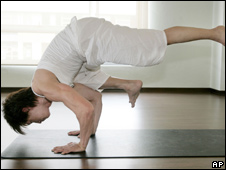 Many people see yoga as a way to maintain their health

Millions of people in Malaysia have been banned from doing yoga because of fears it could corrupt Muslims.

The Islamic authorities have issued a ruling, known as a fatwa, instructing the country’s Muslims to avoid yoga because of its Hindu roots.

To most people yoga is simply a sport – a stress-busting start to the day.

Malaysia’s National Fatwa Council said it goes further than that and that elements of the Indian religion are inherent in yoga.

Announcing the decision, the council chairman Abdul Shukor Husin said practices like chanting and what he called worshipping were inappropriate and they could “destroy the faith of a Muslim”.

The ruling is not legally binding but many of Malaysia’s Muslims abide by fatwas.

Yoga classes here are filled with mostly non-Muslim Malaysians of Chinese or Indian descent, but in the major cities it is not uncommon to see several Muslim women at classes.

For Muslims across Malaysia the day starts at 5.30 in the morning, as the call to prayer goes out.

A handful of the most devout arrive at a mosque in the western outskirts of Kuala Lumpur.