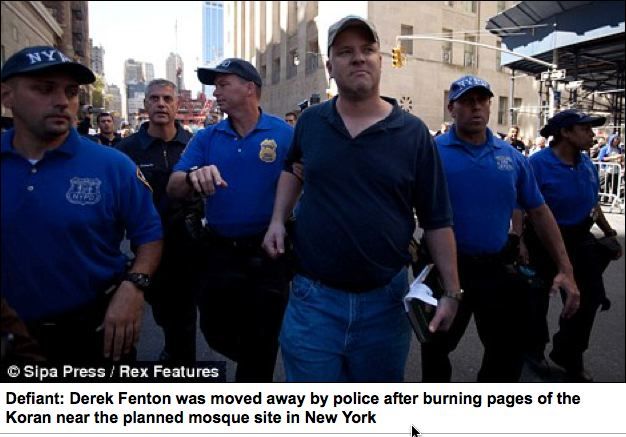 From the Daily Mail online:

A protester who burned pages of the Koran outside the site of the planned mosque near Ground Zero has been sacked from his job as a train conductor.

Derek Fenton, 39, of Bloomingdale, New Jersey, was photographed ripping up pages from the Muslim holy book and setting them alight on September 11.

He was removed from outside Park51, the site where the controversial mosque could be built, by police but was later released without charge.

But it now appears his former employer NJ Transit has taken more drastic action after confirming he had been dismissed.

‘NJ Transit concluded that Mr Fenton violated his trust as a state employee and there he was dismissed.’

Mr Fenton was allegedly inspired to carry out the act by Reverend Terry Jones, the Florida clergyman who sparked international protests when he threatened to stage a Koran burning day on the ninth anniversary of the September 11 attacks.

A police source told the New York Daily News: ‘He said “this is America” and he wanted to stand up for it, in a Tea Party kind of way.’

Another police source said he described himself as exercising his ‘right to protest’.

Mr Fenton was an assistant train-consist coordinator – which entails ensuring there are enough train cars positioned to be put into service.

New Jersey Transit did not give specifics behind why he was dismissed.

But if he was sacked because of his actions, he could be protected by his First Amendment rights, according to the New York Civil Liberties Union.

Chris Dunn, from the union, said: ‘The Supreme Court has recognised a constitutional right to burn the flag.

‘As reprehensible as it may be, burning the Koran would be protected as well.’