An excellent article by Diana West: 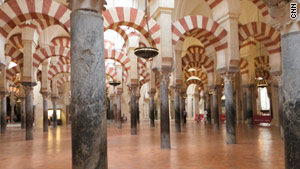 Photo: Inside the Cordoba Cathedral, the architectural legacy of its pre-13th century existence as Cordoba’s Great Mosque, which was built from Cordoba’s pre-8th century cathedral dedicated to Saint Vincent.

As noted in Andrew Bostom’s essay debunking the just-can’t-shake-it myth of Islamic “tolerance” in Muslim Spain, by the middle of the 8th century, the cathedral in Cordoba dedicated to Saint Vincent had been “converted” to a Muslim mosque. However, as 19th-century scholar of Muslim Spain (and Islamophile) Reinhart Dozy writes, this was “clearly an act of spoilation as well as an infraction of the treaty” between Cordoba Christians and the invading Arab Muslims.

All the churches in that city [Cordoba] had been destroyed except the cathedral, dedicated to Saint Vincent, but the possession of this fane [church or temple] had been guaranteed by treaty. For several years the treaty was observed; but when the population of Cordova was increased by the arrival of Syrian Arabs [i.e., Muslims], the mosques did not provide sufficient accommodation for the newcomers, and the Syrians considered it would be well for them to adopt the plan which had been carried out at Damascus, Emesa [Homs], and other towns in their own country, of appropriating half of the cathedral and using it as a mosque. The [Muslim] Government having approved of the scheme, the Christians were compelled to hand over half of the edifice. This was clearly an act of spoliation, as well as an infraction of the treaty. Some years later, Abd-er Rahman I requested the Christians to sell him the other half. This they firmly refused to do, pointing out that if they did so they would not possess a single place of worship. Abd-er Rahman, however, insisted, and a bargain was struck by which the Christians ceded their cathedral.

And so the single remaining church in the city became the Great Mosque of Cordoba. This mosque became a cathedral again in 1236 when King Ferdinand III of Castile recaptured the city from Muslim Moors.

Note, however, in these following thumbnails from recent news accounts of Muslim attempts to take the cathedral back for Islam (I’m not kidding), the fudging or complete omission of the cathedral’s Christian origins preceding the establishment of the Great Mosque.

From the Times of London, April 3, 2010, “Muslims arrested for trying to pray in Cordoba’s former Great Mosque”:

The Great Mosque of Córdoba was converted into a Christian church in 1236 after King Ferdinand III of Castile recaptured the city from the Moors. The building later became the modern-day Cathedral of Our Lady of the Assumption.

Muslim organisations have long campaigned for the right to pray inside the building, which was once one of the biggest mosques in the world.

However, Demetrio Fernández González, the recently appointed Bishop of Córdoba, reinforced a ban on Muslims praying in any part of the 24,000sq m (260,000sq ft) building, saying that canon law did not permit it.

A statement from the bishop’s office said: “The shared use of the cathedral by Catholics and Muslims would not contribute to the peaceful coexistence of the two beliefs.”

The Roman Catholic Church cited archaeological reports that said before the Mosque was built in the 8th century remains of an earlier Christian temple had stood on the same spot.

Oh, and by the way, the Times also reports (paragraph 9):

After being asked to stop praying,  [Catholic authorities] added, “they [two of the praying Muslims] replied by attacking security guards, two of whom suffered serious injuries.”

From CNN, August 17, 2010, “Muslims in Spain campaign to worship alongside Christians”:

Muslims in Spain are campaigning to be allowed to worship alongside Christians in Cordoba Cathedral — formerly the Great Mosque of Cordoba.

And what else? Nothing, according to CNN.

Today, at the original Cordoba mosque in Spain, there is no call to prayer, only the ringing of church bells. That’s because the former mosque is now a working Catholic cathedral, performing a daily mass.

It’s been a Cathedral since Spain’s Christian monarchy conquered Cordoba in the 13th century and more than a million visitors walk through its doors every year.

Look, Ma — no pre-Islamic history! This obliteration of the past is a traditional hallmark of Islamic conquest.

Meanwhile, note the Islamic good-cop, bad-cop routine, something I’ve been tracking at least since the foiled British Airplane  Plot of 2006 when it struck me that in the wake the jihadists’ attempt to bring down passenger airliners (bad cop), British Muslim leaders followed up by lobbying the government to sanction more sharia in Britain to avoid future outbreaks of such “extremism” (good cop). Notice both sets of actors, the violent jihadists (bad cop) and the peaceful lobbyists (good cop), are after the same goal: extending sharia.

Anyway, to recap the situation in Cordoba: In April, violent “worshippers” (bad cop) seriously injured (knifed) security guards. In August the “peaceful” lobbying effort (good cop) to convert the Catholic cathedral into a half a mosque continues apace. They’re both trying to achieve the same goal

And with CNN’s implicit favor:

Depictions of Jesus’ crucifixion hang underneath the distinctive red-and-white arches of what was once the Muslim prayer hall. Cordoba’s dazzling “mihrab” — the sacred alcove from where Muslim prayer is lead — still stands as a separate part of the site and is one of the main attractions for tourists.

In fact, the site remains significant for Muslims as a symbol of Islam’s golden age of learning and religious tolerance.

Ah, back to that fraud.

The Mosque of Cordoba was once famed for allowing both Christians and Muslims to pray together under the same roof.

Yes, as, Dozy tells us, as an act of “spoilation” and a broken treaty.

Now, some Muslims are trying to repeat that history. Mansur Escudero, a Spanish convert to Islam, is leading the movement that is pushing for the right of Muslims to pray at the Cordoba Cathedral.

Uh-huh. Sounds beautiful so long as you block out the clanging echoes from the middle of the 8th century when, as Dozy tells us, Muslims broke their treaty with the Christians, “appropriating half of the cathedral and using it as a mosque.”

10 Replies to “Jihad at the Cordoba Cathedral: Halfway to a Whole Mosque?”