I’m sad to report that irrational religious authority in Israel can be as hate filled, venomous and counter peace when they are Jewish as they are when they are Muslim. Not as often certainly and not genocidaly so, but nonetheless this is repugnant. 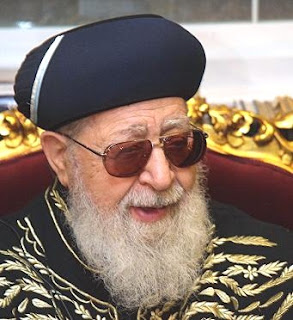 Senior Rabbi Ovadia Yosef, in his weekly lecture on Saturday night, said that he hope Palestinian Authority chief Mahmoud Abbas and the people he represents would disappear. “May Abu Mazen and all those evil people be utterly destroyed. May G-d strike them, and the evil Palestinians, with a plague,” he said.

Shas veteran Yehuda Avidan responded by saying that anyone who knows Yosef knows that there is no one who wants and seeks peace more than him. Avidan explained that the rabbi sees the Palestinians as Israel’s enemies but wants there to be peace.

Until now Yosef has steered clear of commenting on anything related to diplomatic negotiations. At the end of the 1980s Yosef ruled that the country should seek peace, even at the price of painful concessions, given the supremacy of the Jewish value of ‘pikuakh nefesh’ (saving of life).