By Marc Ambinder, The Atlantic Wire 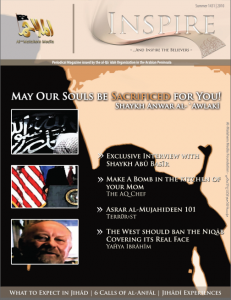 As the U.S. struggles to manage its efforts to influence opinion about Al Qaeda abroad, Al Qaeda on the Arabian Peninsula has produced its first English-language propaganda magazine.

It’s called “Inspire,”  and you can read parts of it below. A U.S. official said early this morning that the magazine appears to be authentic.

“Inspire” includes a “message to the people of Yemen” directly transcribed from Ayman Al-Zawahari, Al Qaeda’s second in command, a message from Osama Bin Laden on “how to save the earth,”  and the cover includes a quotation from Anwar Al-Awlaki, the American born cleric who is believed to be directly connected to the attem

pt to destroy an airplane over Detroit by Umar Farouk Abdulmutallab on Christmas Day. (The director of the National Counterterrorism Center, Michael Leiter, made that disclosure at a security forum in Aspen, CO, Fox News reported.)

The table of contents teases an interview with the leader of AQAP who promises to “answer various questions pertaining to the jihad in the Arabian Peninsula.”  It includes a feature about how to “make a bomb in the kitchen of your mom.”

AQAP’s first effort to post the magazine to jihadist websites failed Wednesday, as many of the pages were contaminated with a virus. (I half seriously believe that U.S. cyber warriors might have had a hand in that little surprise.)

The U.S. is quite worried about Al Qaeda’s new publishing ambitions, which mark a more sophisticated effort to engage the English-language world and to recruit English-speaking Muslims to join the cause.

The copy was obtained from a private researcher. AQAP had advertised for days that the magazine would appear with the interviews specified in the table of contents. It is possible, although not likely, that the magazine is a fabrication, a  production of a Western intelligence agency that wants to undermine Al Qaeda by eroding confidence in its production and distribution networks. The U.S. is engaged in direct net-based warfare with jihadis; this sort of operation would not be too difficult to pull off.

Since I am not completely certain that the clean PDF doesn’t contain a hidden virus, I’ve elected not to post it just yet. 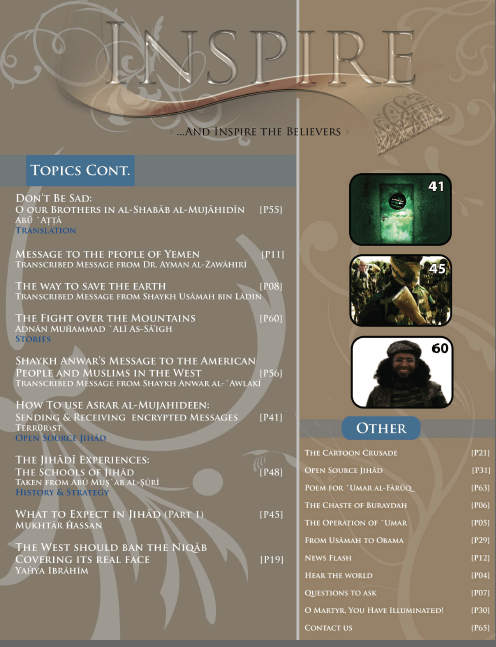 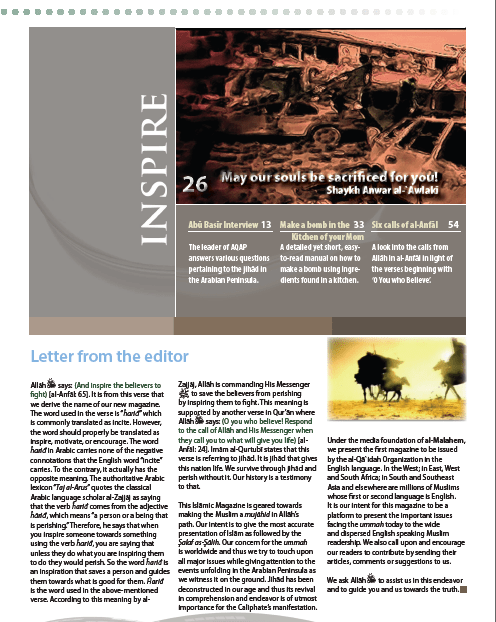