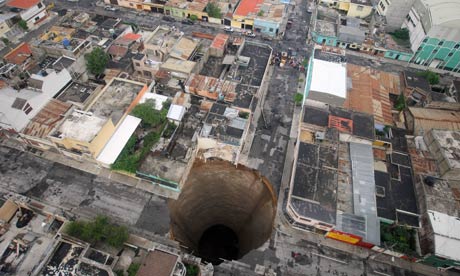 A sinkhole that swallowed a three-storey building in Guatemala City has been blamed on a combination of Tropical Storm Agatha and poor drainage systems Photograph: Luis Echeverria/AP

The first named storm of the 2010 Pacific season dumped more than a metre of rain in parts of Guatemala, also hitting El Salvador and Honduras. At least 113 people were reported killed, with around 50 missing in Guatemala alone as rescue workers searched through the rubble.

The 30m-diameter sinkhole opened up in a northern district of Guatemala City, with residents blaming the rains and substandard drainage systems. Local reports said one man was killed when the building was swallowed. In 2007, three people died when a similar sinkhole appeared in the same area.

Guatemala was the worst affected country, with a confirmed death toll of 92, although that is likely to rise when rescuers reach remote villages. Almost 100,000 people have been evacuated from their homes. Nine people were confirmed killed in El Salvador and 12 in Honduras.

“I’ve got no one to help me. I watched the water take everything,” Carlota Ramos told Reuters outside her mud-swamped brick house in Amatitlan, a town near the Guatemalan capital.