David Cameron has ordered his party’s candidates to submit their online utterances for vetting.

The strict edict issued to every Tory candidate across the country covers updates on social networking sites, such as Twitter and Facebook, as well as Internet blogs and websites.

The move aims to cut the number of gaffes in the run-up to the General Election when would-be MPs will face intense scrutiny. 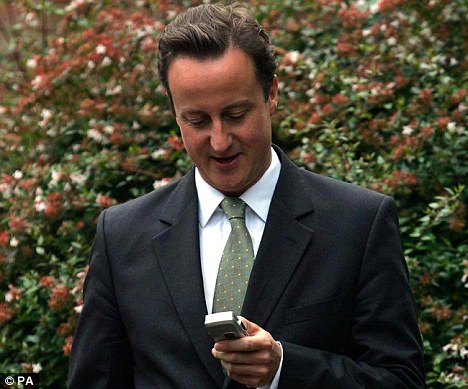 But last night critics said the move smacked of the worst excesses of New Labour in the 1990s under spin doctors Alastair Campbell and Peter Mandelson.

In the e-mail to Tory candidates, they were told ‘electronic publications such as websites, blogs and Twitter have to be approved before they are posted’.

‘The whole thing about new media is that you can’t have this spin operation and control without destroying the spirit of it,’ she said.

‘You may put your foot in it from time to time but if you try to control it, it just becomes sterile. 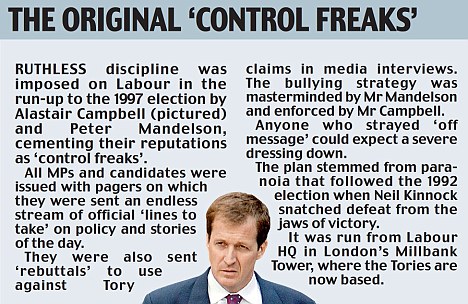 ‘The Tories are trying to use Twitter to just parrot party lines, which is pointless because people can see straight through it. They seem to be scared of what their candidates might say.’

Twitter users are invited to send 140-character messages, known as tweets, describing what they are doing or thinking.

It has been regarded by some analysts as an ideal way for politicians to connect with younger voters.

However, some MPs and candidates have run into trouble with their online remarks.

Tory grandee Sir Nicholas Winterton was outed for slapping the bottom of Labour MP Natascha Engel after a message on Twitter.

Last night, a Conservative source insisted the party had no intention of overseeing every utterance by candidates, adding that this would be impractical.

He said the edict only covered comments on policy and was designed to ensure that candidates outlined the party’s views correctly.

A Tory spokesman said: ‘We are encouraging people to Twitter. Our candidates are free to write what they like on blogs, newspaper websites and other electronic media.

‘This e-mail is simply a reminder that they should double- check factual details about national policy.’

Mr Cameron is famously doubtful of the value of Twitter as a political tool. Last year, he apologised after declaring on radio: ‘Too many tweets might make a tw*t.’

And the Conservative leader made it clear last month that he believed the risk of making a gaffe outweighed any possible benefit.

One, Andrew Rosindell, has left his 314 Twitter followers just one message since signing up 12 months ago with the words: ‘Andrew is excited to have joined Twitter’