Mohamed:
Mohammedans really do worship me
More seething going on in Oslo, Norway, as Muslim taxidrivers seethe, moan and wail at the Norwegian moon over the Dagbladet’s publishing of the dreaded picture of Mo. Yawn. KGS 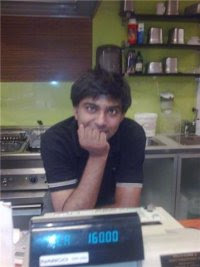 Seething taxi driver, Rashad Munir:
We wanted to show our opposition to it
that makes a mockery of our values…….

[A large number of Oslo taxi drivers already have been charged with tax evasion and welfare fraud. Now Oslo police suspect around 40 drivers and even more taxi owners of having close contact with Pakistani gangs, and operating as couriers of arms and drugs.]

Oslo taxi drivers protesting against the drawing of the Muhammad cartoons

The Norwegian newspaper Dagbladet, released on Wednesday one of the illustrations on its front page.

Spontaneous demonstration was launched on Friday evening, and urged the busy men behind the wheel to park their cars during the period of two and four o’clock. According to police, the protest went peacefully.

Dagbladet used the drawings to illustrate a story, according to which the security police PST’s website has a link to the infamous cartoon images that have given rise to such bad blood. In the drivers’ view, the publication of the picture, was once again unnecessary.

– We wanted to show our opposition to it that makes a mockery of our values, “said the driver Munir Rashad.