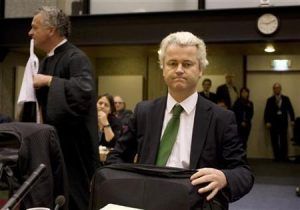 An Amsterdam court said on Wednesday it will hear the case against right-wing Dutch MP Geert Wilders on charges of inciting hatred and discrimination against Muslims, rejecting his request to be judged in the Supreme Court.

In its ruling, the lower court rejected an assertion from Wilders’s lawyer that the Supreme Court in The Hague should hear the case because, as a member of parliament, Wilders has a certain protection under freedom of speech laws.

The case is considered to be at the heart of the Dutch constitutional state, exploring the line between the right to freedom of speech and the ban on discrimination in the traditionally tolerant Netherlands.

“The court in Amsterdam has jurisdiction to hear the case,” the district court said in its ruling.

Wilders shook his head repeatedly, making and exchanging notes with his lawyer during the reading of the ruling, which took a little over 30 minutes.

The court also denied a request from Wilders to call as a witness Mohammed Bouyeri, the convicted killer of Dutch filmmaker Theo van Gogh.

Van Gogh was killed in 2004 as he cycled to work in Amsterdam, after making a film which was also critical of Islam together Dutch politician Ayaan Hirsi Ali. He had a note pinned to his body with a knife that threatened politicians who criticise Islam.

Wilders has said Bouyeri is “living proof” that Islam inspires violence, but the prosecution was opposed to Bouyeri giving evidence.

“The court is denying me a fair trial,” Wilders told reporters, adding that he was “angry, disappointed but ready to fight.”

The Freedom Party leader, who has faced death threats over his political views, made a film in 2008 which accused the Koran of inciting violence and mixed images of terrorist attacks with quotations from the Islamic holy book.

Wilders was also charged because of outspoken remarks in the media, such as an opinion piece in a Dutch daily in which he compared Islam to fascism and the Koran to Adolf Hitler’s book “Mein Kampf.”

A prosecutor originally said Wilders was protected by the right to free speech, but a court overruled that decision last year and ordered that Wilders be charged. He faces a maximum of one year and three months imprisonment if convicted on all counts.

2 Replies to “Amsterdam court to hear case against Wilders”