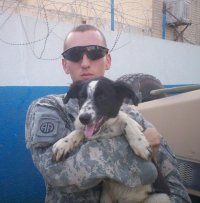 U.S. troops in Iraq and Afghanistan befriend local animals as a way to help cope with the emotional hardships they endure every day while deployed in a war zone.  The Operation Baghdad Pups program provides veterinary care and coordinates complicated logistics and transportation requirements in order to reunite these beloved pets with their service men and women back in the U.S. These important animals not only help our heroes in the war zone, but they also help them readjust to life back home after combat.

The Beginning of Operation Baghdad Pups: 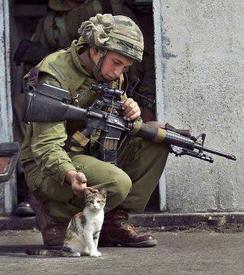 Operation Baghdad Pups began shortly after SPCA International received an exceptionally compelling email on September 11, 2007. The desperate words from the U.S. soldier serving in Iraq told of his determination to get a dog his regiment had befriended out of the Middle East before their 15-month deployment ended. The insurmountable obstacle was a military regulation that prohibits troops from befriending an animal in a war zone or using military property to transport one home. After two months of trying to cut through the red tape, the likelihood of success for the then discouraged soldier seemed doubtful. It was at this point that Sergeant Edward Watson contacted SPCA International.

Charlie was discovered by members of Sergeant Watson’s regiment while on patrol in a high-risk neighborhood on the outskirts of Baghdad. The malnourished and flea-covered puppy, no bigger than a baked potato, wandered into their life unexpectedly. Scooped up and hidden in a tattered blanket by a soldier who felt sorry for the pitiful orphan, the puppy was snuck onto a coalition forces outpost. Although the soldiers faced serious consequences if caught, each took turns secretly caring for their new wartime buddy. The growing bond between the men and their dog justified the risk.

“Taking care of Charlie gave me something to look forward to and that definitely made my time in Iraq more bearable,” Sergeant Watson explained in his email. “When all the guys got to playing with Charlie, we’d forget where we were, at least temporarily. During those moments you could almost imagine being home.”

Abandoning Charlie in the war-ravaged country would have meant certain death for him. “We all made him a promise that we would not give up on him. For that reason, we have to find a way to get Charlie to a better life in the states,” Sergeant Watson wrote. “We just can’t leave our buddy behind.”

The U.S. troops deployed in the Middle East have sacrificed so much to ensure our freedom here at home – SPCA International knew we had to help. Asking our troops to suffer the loss of one more friendship or comfort was not an option.

After months of aggressive research, countless aggravating moments, disappointing dead ends and dozens of emails exchanged with Sergeant Watson, SPCA International found a way for this group of soldiers to keep the promise they had made to Charlie. It meant, however, SPCA International staff had to fly to Baghdad to pick him up.

On Valentine’s Day 2008, Charlie and Terri Crisp, an SPCA International staff person, landed safely and triumphantly at Washington Dulles International Airport in Virginia, greeted by CNN, the Washington Post and local television stations. It was Charlie’s star power and the dedication of a special group of soldiers that paved the way for others serving in Iraq and Afghanistan to find freedom in the U.S. for their dog or cat.

Now living with Sergeant Watson in Arizona, Charlie has wagged his way into many hearts including those of the SPCA International staff and volunteers. We continue to carry Charlie’s joy of freedom with us as we expand our mission to bring animals befriended by the troops to new homes in the states. Operation Baghdad Pups has now helped to fulfill many, many promises of love and friendship, just like the one made to Charlie

One Reply to “Operation Baghdad Pups”