From The Gibraltar Chronicle 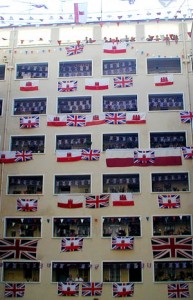 Just months after lobbying for local votes for European elections British National Party Leader Nick Griffin has sparked furious criticism after he reportedly told a rally of Spanish fascists that the BNP would hand Gibraltar to Spain against the wishes of nearly all its 30,000 inhabitants.

“Griffin hoped to make a quiet sop to Spanish extremists, but was exposed by anti-BNP campaigners,” says Graham Watson who represents Gibraltar in the European Parliament. He was angered by Mr Griffin’s comments.

“Taking into account the geographical situation of Gibraltar and the Muslim threat on its door, I would prefer to see a Spanish flag fly in Gibraltar before an Islamic one,” Mr Griffin is quoted as saying.

He added: “It would be much easier to sort it out if we had nationalist governments in Britain and Spain because it would then be an agreement between equals”

“Griffin’s words show the complete lack of respect that the BNP hold towards freedom and democracy. Far from defending the British people, he has shown that his party would betray the trust of thousands in order to please his fascist friends,” said Mr Watson.

“As long as the people of Gibraltar wish to remain British citizens, they should be guaranteed protection by the British government. The BNP may wish abandon British subjects, but I will never support it.”

3 Replies to “BNP Would Give British Territory to Spain”