From the Gates of Vienna

Kurt Westergaard, the man behind the most famous Mohammed cartoon, offered a piece of his artwork to a charity auction for victims of the Haitian earthquake. The charity rebuffed his offer due to fears of violence.

Our Danish correspondent TB has collected and translated the material for this post, but I’ll post his appeal for the charity first, since the auction is on Saturday, and this is therefore time-sensitive:

I urge everyone to spread this web address. This is where you can bid on Kurt Westergaard’s painting or just leave money for the kids of Haiti.

Use this form to place a bid.

Here are the two men behind it. The headline above the picture reads: “Everybody loves Kurt, except Lauritz!”

Next is a brief news story about what happened, and below that is a press release from Galleri Draupner.

What is notable about the news story below is Lauritz’ explanation that “[w]e value the safety of our employees”. This is the customary reason given for self-censorship under the dhimmi regimes of the Islamized West. Yale University Press, Borders bookstores, various newspapers and television stations, the publishers who refused the novel about Aisha — all of them moderated their actions based on a perceived need to keep their employees safe.

Their rationale may be restated thus: “We fear that violent religious thugs will injure or kill us. Therefore we will accede to their demands in advance, in order to make sure that no one gets hurt.”

Jihad is not even necessary. The lickspittle craven cringing cowards of our cultural elite are ready to cry uncle before the first sword leaves its scabbard.

TV2’s morning lifestyle programme Go’morgen Danmark was the latest in a long line of those trying to help the victims of the Haitian earthquake. The show organised an auction through auctioneers, Lauritz.com, and asked well known politicians and personalities to donate personal items for the charity fundraiser.

A signed copy of Bill Clinton’s book dedicated to the head of the Social Democrats, concert and sports events tickets and a porcelain doll owned by Pia Kjærsgaard, head of the Danish People’s Party, are already listed in the auction. 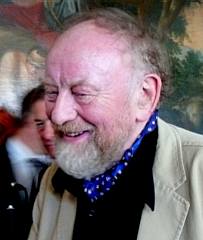 However, when cartoonist Kurt Westergaard — forever to be associated with the Mohammed cartoons and terror threats — was asked to submit a new drawing for the auction, the auctioneers refused to accept it.

According to Mette Jessen of Lauritz, the decision was taken because of the latest attempt on Westergaard’s life when an alleged assassin broke into his house on New Year’s Day.

‘We must recognise that the terror threat is still of such a character that we can’t predict the consequences of a sale. We value the safety of our employees quite highly, which is why an eventual risk assessment was used in our consideration,’ she said.

Westergaard was disappointed in Lauritz’s decision, saying it was just another example of how his name creates fear.

‘The drawing was in no way controversial, but it seems my name is. I’m sorry for the fear it causes people. When even my hairdresser, who is Muslim, told me with sadness that she didn’t dare keep me on as a customer for fear of reprisals, then there’s reason to be sad about this development,’ he said.

Lauritz has now come under fire from all sectors of the art and political world, even Prime Minister Lars Løkke Rasmussen highlighted the matter at his weekly press conference. [emphasis added]

With all due respect to Mr. Westergaard, it is not his name which creates fear, but the vicious enemy that no one dares name.

What causes fear is not Kurt Westergaard or “terrorism” or “violent extremism” or even “radical Islam”, but Islam itself.

And with good reason.

Here’s the press release from the gallery:

Everybody loves Kurt — except lauritz.com

The artist Kurt Westergaard — who at the moment is in the midst of the worst crisis of his life — has shown in the most outstanding way that he still has the ability to help others in need — such as the children of Haiti!

Kurt Westergaard has made an adventurous drawing which was donated to national Danish TV 2 [who had asked him to participate — translator] as part of their attempt to collect money through an auction on Lauritz.com.

In an unprecedented instance of “self-inflicted anxiety”, lauritz.com yesterday rejected the gift of anything from Kurt Westergaard, including a little painting which is completely free of political or religious messages.

At Gallery Draupner we are astonished that Karen Thisted [a well known debater in Denmark who has called Kurt Westergaard a coward] has succeeded in finding herself a dancing partner in the form of Lauritz.com to dance around with like two bulls in a china shop.

For such a constellation of tastelessness and human limitation as this, one has to search for a long time.

Since yesterday (Monday) there have been rumors that the drawing would be sold on several political parties’ homepages, including DF (The Danish Peoples’ Party) and SF (The Socialists).

The situation is this that they — and other political parties — have published the link to Gallery Draupner’s homepage where the painting will be available.

Gallery Draupner and Kurt Westergaard will donate the entire amount paid for the painting to the children of Haiti.

Right now we experience that the whole of Denmark stands behind Kurt Westergaard — and Europe and the world, for that matter. We have been up all night in the gallery to register emails and bids on Kurt Westergaard’s painting. As I write this at 07.40 Tuesday morning the bid is 10,000 kroner (around US $2000) from a buyer in Aalborg, although the drawing has not yet been published. It will be published later today.

From Gallery Draupner we have a clear message and request to everybody that you publish a link to the galley’s homepage from your own homepage until Saturday night when our auction finishes.

Best wishes on behalf of the children