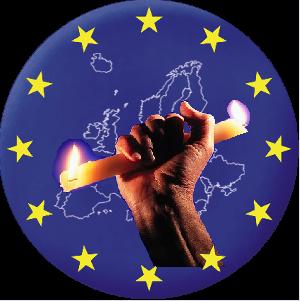 Burning a candle at both ends
By way of the ever reliable Reinhard. The Tundra Tabloids is handed an excellent example of the EUROMED agenda, which seeks to populate (read = help colonize) an aging Europe with peoples from “the South”, or in other words, people from Muslim N.Africa and from the rest of the Levant.
The blog Gallia Watch reports of a meeting that took place in which Malika Sorel, an Algerian who takes a rare pro-France and pro-nationhood position ”wrote an assessment of a meeting of European ministers organized by the French Minister of Immigration and National Identity, Eric Besson.”
To get an understanding of just where Malika Sorel is coming from, take a look at a recent post o in which she exposes the stark differences in the views of François Fillon and Eric Besson concerning the French national identity.

“François Fillon, closing the discussion “What is being French?” At the Institut Montaigne, December 4, 2009: “We have our morals and a certain lifestyle […] La France, it ‘ is not a fiction without respect and without face […] By the power of the state, the communion of the language, the price of blood and the flame of memory and myth, under the seal finally a democratic and secular Republic, the French identity was achieved step by step […] ”

Eric Besson, La Courneuve, January 5, 2010: “La France is neither a nation nor a language nor a territory, nor a religion, it is a conglomerate of people who want to live together. There is no French-born, there is a blending of France.”

Both statements are radically opposed.”

Now you begin to understand the mindset of Eric Besson, and where he is coming from, the man is for the complete erasure of the nation state’s identity. Besson represents the EUROMED mentality in full. This is what >Bat Ye’or, and many others in the counterjihad who have taken her words seriously, have been banging the drum about for some time now.
Just recently Pamela Geller over at Atlas Shrugs has been running a series on the EURO-MED partnership, with most recent one titled, The last nail in Europeäs coffin, which highlighted it being less of a partnership and more like a suicide pact. Read what this Algerian born French patriot has to say about the EURO-MED meeting that she was covering. To those who believe that the EU is a benevolent insitution that only seeks to secure a safer, more prosperous Europe, for Europeans…..think again. KGS

GalliaWatch: ” “To them, we no longer exist…”
Yesterday morning I attended a ministerial seminar organized by Eric Besson on the theme “The migrations in the lands of the Mediterranean: constructing a space of shared prosperity“. Insofar as many journalists covered the seminar, I feel safe in sharing with you a few high points.
The ministers of Cyprus, Greece, Spain, Croatia, Malta, Montenegro, Morocco, and Egypt were among the guests.
One expert set the tone right away by declaring that since the European population was aging, three possibilities ensued. I quote them:
1. We delay the age of retirement. Not a very popular measure.
2. We put more women in the workplace. That would have a negative effect on the birth rate.
3. We organize international migrations.
And with these words, obviously intended to allow the ministers to begin their well-prepared speeches, the main theme of the morning was set: since the North was not producing children, and the South producing many (they actually said it), it was necessary to agree to organize migratory waves from the South to the North. Several ministers even declared that since immigration, in any case, was occurring illegally when it was not authorized, it would be preferable to legalize and organize it. They also said that 75% of the youth of Tunisia were considering leaving their country…
Here is a sampling of the words uttered by the ministers from northern countries:
– “The countries of the North need labor.”
– “Immigration increases the competitiveness of the countries of the North.”
– “Immigration benefits the countries of the South as well as those of the North.”
– “Since labor from the South is unskilled and since the North will need more and more a supply of skilled labor, the Northern countries must help train the labor from the South so that it can fulfill the requirements.”
– “We must have a flexible policy of visas in order to facilitate the movement of these immigration influxes.”
– “We must facilitate the ability of the immigrants to remain in contact with their homelands and to transfer a part of their earnings.”
– “We must organize welcoming committees in such a way that they recognize their diversity. At any rate, it’s the example that will be used everywhere. Priority must be given to the fight against discrimination.”
– “A world without immigration would be a world more divided, more radical.”
– “Poverty and the lack of development were caused by colonization.”
“Immigration is perhaps the solution to the crisis,” a Swedish minister said solemnly.
The two ministers from the South asked that their nationals be well-treated in the host countries, and that in the rush to organize migratory influxes from the South into the North, care be taken to maintain the powerful ties with the homeland, in order for migrants to transfer money back to their country of origin (…) The Moroccan minister emphasized that these migrants (the Moroccan community abroad) constituted a diaspora, and that Morocco would actively take care of them. The Egyptian minister began his speech with “In the name of Allah the most merciful…” and formulated the hope that the Arabic language become more common in the future in the Mediterranean bassin.
Eric Besson concluded the meeting thus: “We must accelerate and increase the mass movements.”
All the ministers signed the “Paris recommendation on the promotion of the mobility of young persons in the Mediterranean space,” of which this is an excerpt: “Reaffirming their determination to build a common Mediterranean future, they agree on the necessity to give priority to youth in the construction of a Mediterranean space for the movement of persons, of knowledge and of skills.”
A Mediterranean office of youth will be created by January 1, 2011. Its goal will be to facilitate the free movement of students of certain universities, and to provide them with grants. (…)
During this entire morning it was patently clear that European peoples were of no interest to the European ministers. It was as if Europe was an uninhabited land, or soon to become one, and there was a need to people it. The only moment when you felt that Europeans still existed in the minds of these ministers was when mention was made of the need to fight against the discrimination that these migrants would be victims of…
This morning showed me, as if it was still necessary to do so, the extent to which this European “elite” was sometimes more concerned about the interests of foreign populations that about those of their own people. It is indeed this elite that is responsible for the current situation, and not the immigrants.
Henceforth, only the European populations themselves will be able to spare their countries chaos, and at the same time save their lives and those of their descendants, for it is clear that what is being planned for us by leaders who don’t even realize it, is a proliferation of Balkan States throughout the European Union. We are indeed far away from the dreams of the founding fathers!
NOTE: This was a comment that the TT posted before, but in spite of the commentor’s original foolish intent, (to describe national, ethnic survival as a racist intention) it remains nevertheless a clear warning for us all.

“However, I do have some advice for Europeans who hate Muslim foreigners: HAVE BABIES! You need immigrants because the average age of Europeans now stands around 41, Is that the fault of Muslim immigrants? No, it’s the fault of an inheritantly selfish-materialist-consumerist culture. Let’s propose you drive out all the foreigners, who is going to run these huge geriatric colonies that the EU will become very soon? Like it or not; the median age in Turkey, Iran, Yemen, Morocco,Saudi Arabia, Pakistan, Bangladesh, and Egypt is about 17, In Denmark, Sweden,UK, Hungary, France, Germany and Spain the average age is 41! In the passion of your hatred, try to be realistic: ISLAM IS THE FUTURE OF EUROPE!”