This I am reliably informed is a common thing in many parts of Latin America, as more and more people, especially the Indians of South America, feel betrayed or take on a post-modernist view of the Catholic Church and it’s history with them.

H/T Islam in Europe From RNW.NL 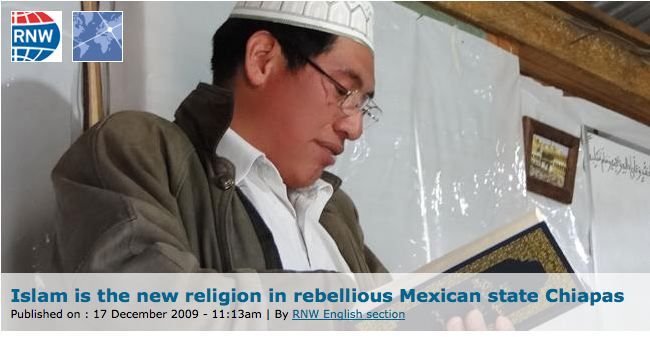 More and more Mayan and Tzotzil people in the Mexican state Chiapas are becoming Muslims. It’s fifteen years since the Zapatista uprising in Chiapas and the region has undergone some profound changes. One of them is the emergence of Islam as a new religion in the state. The Muslim community, dominated by converted Mayans and Tzotzils , is slowly gaining ground.

Molino de los Arcos is one of the poorest neighbourhoods of San Cristóbal de las Casas, the second largest city in Chiapas and popular with tourists for its colonial beauty. The barrio is ethnically almost entirely indigenous, with Tzotzil Mayan as the dominant language. On Fridays, though, you can hear the slow, monotonous Arab chants of Muslim prayer. In a wooden shack, painted with Arab religious phrases, some twenty Tzotzil Muslim families have established a small place of worship.

“This is where we cleanse our spirits and pray to Allah. Not everyone came today, some people have to work,” Imam Salvador Lopez Lopez smiles. “But we are doing well. Our community is still small, we are maybe two hundred, but little by little we’re growing.”

Lopez converted to Islam in 1995 and adopted the Arab name of Muhammad Amin. He was one of the first Tzotzils to embrace the religion. He describes his conversion as a tough, two-year period of soul searching. “There is a lot of ignorance in Chiapas about Islam. Nobody really knew what it was and at first I myself wasn’t sure it was the thing for me. My family didn’t agree with it either at first. It was hard.”

Alternative to capitalism
There have always been Muslims in Mexico, but they were usually immigrants from Muslim countries in Africa and the Middle East. It wasn’t until 1995, when Spanish Muslims led by Aureliano Pérez left for Mexico to spread the word of Allah, that Mexicans themselves started converting to Islam.

The arrival of the Spanish can be seen in direct relation to the uprising of the Zapatista rebels in Chiapas, in 1994. They saw the impoverished state as fertile ground for the principles of Islam. Indigenous Mayans and Tzotzils have led marginalised lives ever since the Spanish conquest in the 16th century. They live in extreme poverty, suffer exploitation by corrupt governments and racism by white and mestizo Mexicans (people with mixed European and Native American racial origin). Alcoholism among indigenous Mexicans is rampant.

The Mayans and Tzotzils belong to the Murabitun movement within Sunni Islam, which upholds a strict ban on the use of alcohol and profits made on money lending. It has proven to be attractive to indigenous Chiapanecos as a viable alternative to capitalism. Yet Muhammad Amin stresses that Islam is not just for indigenous Chiapanecos: “Allah makes no distinction between race. We welcome everyone.”

Zapatist Muslims
The social component in Chiapaneco Islam did present itself in its early days though, when the Muslims under Nafia offered to support the Zapatista rebels of Subcomandante Marcos. Many Zapatista rebels, who fight for indigenous rights and land reform, are Tzotzils. A number of them did convert, even though Marcos was hesitant at first. The Mexican government was alarmed and started monitoring the presence of Islam. Former president Vicente Fox even accused them of having links with Al-Qaeda, although solid proof was never presented.

Muhammad Amin chuckles when he refers to these accusations. “We have no links whatsoever with any foreign group of Muslims, and we have no problem with any other religion here. Islam means peace, we respect everyone around us.”

That doesn’t mean that Christians responded positively to their new competitors. Andrés Ferrer, who now goes by the Arab name of Muyahid, converted to Islam in 1998. He’s had to overcome a lot of prejudice:

“Many people reacted badly, because they have no idea what Islam is. Some of them even called us terrorists. My own family called me crazy!”

Islamic pizza restaurant
Despite the opposition Islam is doing well in Chiapas. The Muslims have opened a madrasah or Qur’an school, an Islamic mission, a carpenter’s shop and a pizza restaurant. They teach Arabic to new converts and even organize the hajj or pilgrimage to Mecca, which many indigenous Muslims have already undertaken. Islam is growing slowly but surely, says Imam Lopez:

“In this particular mosque there are seventeen Islamic families now. Gradually more people are opening themselves up to the word of Allah. Yes, I think we are here to stay.”