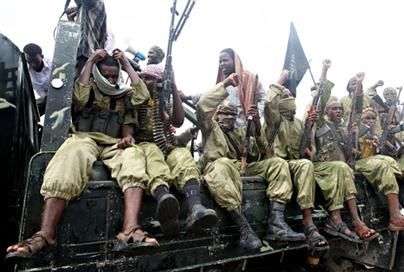 Good Muslims on the way to prey

TORONTO — Counterterrorism officials are investigating a group of youths who allegedly left Canada for East Africa two weeks ago, amid concerns they may have gone to join the Somali militant group Al-Shabab.

Two sources familiar with the case said investigators had been canvassing Toronto’s large Somali-Canadian community for information about as many as five men who departed Canada together in early November.

They are believed to have flown to Kenya, the sources said. Kenya borders the region of southern Somalia controlled by Al-Shabab, an Islamist militia aligned with al-Qaeda and sometimes likened to the Taliban.

The investigation comes as the Somali conflict has become a key focus of North American counterterrorism officials. Several Somali-American youths have left the Midwestern United States to join the Shabab, and the commissioner of the RCMP said in a speech last month he is concerned about a similar trend in Canada.

“Radicalization within the U.S. Somali community may be an indicator of similar processes at work in Canada,” Commissioner William Elliott said in his Oct. 30 address to the Canadian Association of Security and Intelligence Studies in Ottawa.

“As you know, we have one of the largest Somali diaspora communities in the Western world. The potential follow-on threat, from a Canadian and RCMP perspective, is Somali-Canadians who travel to Somalia to fight and then return, imbued with both extremist ideology and the skills necessary to translate it into direct action.”

Al-Shabab, which means “youth,” is an armed extremist group that has emerged from the lawlessness and chaos of Somalia and aims to establish an Islamic state.

It has been battling pro-government forces and African Union peacekeepers, and now holds the country’s south and most of the capital of Mogadishu, where it has imposed harsh laws and carried out beheadings and stonings.

A handful of Canadians have fought with armed Somali groups in recent years, including Abdullah Ali Afrah, a former Toronto businessman who was killed last year while leading an ambush against Ethiopian troops.

The directors of the Khalid Mosque, one of the most popular places of worship for Somali-Canadians in Toronto, said in a statement to the National Post in September they had no knowledge of any youths who had traveled to Somalia to fight.

“Members of the Khalid mosque congregation have not reported to us any missing children,” the directors said in the statement, a response to questions posed by the Post.

“Our message to the Toronto Somali youth regarding the Somalia conflict is: your parents left Somalia to escape the raging war in the homeland and to provide their families a better life. Do not even entertain the idea of returning to Somalia to fight. Somalia has seen more than its share of bloodletting.

“If you want to help yourself, your family and Somalia, hold fast to your faith, focus on and excel in your academic studies and become a productive member of the Somali community in particular and Canadian society in general.”

But since about 2006, the fight in Somalia has drawn several foreign youths. Earlier this year, two young men told a news conference they were Americans and had traveled to Africa “to fight alongside our brothers of Al-Shabab” and “to be killed for the sake of God.”

An Al-Shabab fighter who claims to be an American is also featured on several videos posted on the Internet that show him leading an ambush. The video is accompanied by rap music about keeping non-Muslims “living in fear.”

Al-Shabab has become a priority in Washington since the families of several Minnesota youths came forward to complain that their young relatives were being radicalized and recruited into Al-Shabab.

At least two Americans have already died in Somalia. Shirwa Ahmed, a 27-year-old Minneapolis college student, became the first known U.S. citizen to carry out a suicide bombing when he blew himself up in Somalia last year, killing 30 people. Another American youth was allegedly shot dead as he was preparing to return to the United States.

Canada is home to about 150,000 ethnic Somalis, according to a report by Canada’s Integrated Threat Assessment Centre. Most are moderates but the report says that, “Some Somali-Canadians have fought as Islamist extremists in Somalia.”

Canadian investigators have been trying to determine who may have been recruiting the youths. Public Safety Minister Peter Van Loan said in March that “to get involved in terrorist organizations or jihadist movements, obviously that’s inconsistent with our values and it’s something that’s alarming and that we watch.”

Read more: http://www.nationalpost.com/news/story.html?id=2230011#ixzz0X8ebECSP
The New Financial Post Stock Market Challenge starts in October. You could WIN your share of $60,000 in prizing. Register NOW