I would hope NASA would be able to track an object the size of the Earth as close as Jupiter is, but perhaps I underestimate the magnitude of the job. In any case, this is interesting. Anyone who actually managed to figure out what 2001 was about may find it even more so. 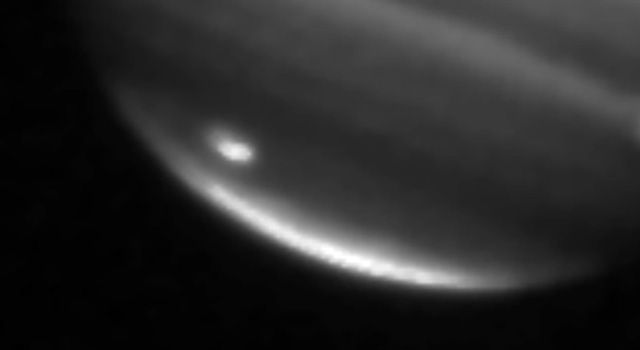 Scientists have found evidence that another object has bombarded Jupiter, exactly 15 years after the first impacts by the comet Shoemaker-Levy 9.

Following up on a tip by an amateur astronomer, Anthony Wesley of Australia, that a new dark “scar” had suddenly appeared on Jupiter, this morning between 3 and 9 a.m. PDT (6 a.m. and noon EDT) scientists at NASA’s Jet Propulsion Laboratory in Pasadena, Calif., using NASA’s Infrared Telescope Facility at the summit of Mauna Kea, Hawaii, gathered evidence indicating an impact.

New infrared images show the likely impact point was near the south polar region, with a visibly dark “scar” and bright upwelling particles in the upper atmosphere detected in near-infrared wavelengths, and a warming of the upper troposphere with possible extra emission from ammonia gas detected at mid-infrared wavelengths.

“We were extremely lucky to be seeing Jupiter at exactly the right time, the right hour, the right side of Jupiter to witness the event. We couldn’t have planned it better,” said Glenn Orton, a scientist at JPL.

Orton and his team of astronomers kicked into gear early in the morning and haven’t stopped tracking the planet. They are downloading data now and are working to get additional observing time on this and other telescopes.

This image was taken at 1.65 microns, a wavelength sensitive to sunlight reflected from high in Jupiter’s atmosphere, and it shows both the bright center of the scar (bottom left) and the debris to its northwest (upper left).

“It could be the impact of a comet, but we don’t know for sure yet,” said Orton. “It’s been a whirlwind of a day, and this on the anniversary of the Shoemaker-Levy 9 and Apollo anniversaries is amazing.”

Shoemaker-Levy 9 was a comet that had been seen to break into many pieces before the pieces hit Jupiter in 1994.

Leigh Fletcher, a NASA postdoctoral fellow at JPL who worked with Orton during these latest observations said, “Given the rarity of these events, it’s extremely exciting to be involved in these observations. These are the most exciting observations I’ve seen in my five years of observing the outer planets!”

The observations were made possible in large measure by the extraordinary efforts of the Infrared Telescope Facility staff, including telescope operator William Golisch, who adroitly moved three instruments in and out of the field during the short time the scar was visible on the planet, providing the wide wavelength coverage.

JPL is managed for NASA by the California Institute of Technology in Pasadena.