Here is a post I hoped never to write. I can’t even spin this one such as ‘Jews behave like Muslims’ or any other configuration I can think of. Frankly, all I had hoped about was true of Jews to a degree is shattered in this. The main defense for me about non Islamic religions was, that other faiths only self impose their bullshit. They do not demand that others follow their beliefs and precepts the way Muslims do world wide. It really saddens me to write up this story but write it I must. My sense of truth and honour and libertarian streak obliges me. 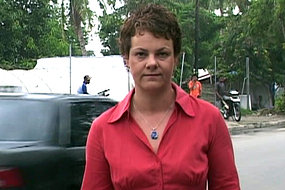 The ABC’s Middle East correspondent Anne Barker became caught in violent street protests involving ultra-Orthodox Jews in Jerusalem at the weekend. This is her graphic account of her ordeal.

As a journalist I’ve covered more than my share of protests. Political protests in Canberra. Unions protesting for better conditions. Angry, loud protests against governments, or against perceived abuses of human rights.

I’ve been at violent rallies in East Timor. I’ve had rocks and metal darts thrown my way. I’ve come up against riot police.

But I have to admit no protest – indeed no story in my career – has distressed me in the way I was distressed at a protest in Jerusalem on Saturday involving several hundred ultra-Orthodox Jews.

This particular protest has been going on for weeks.

Orthodox Jews are angry at the local council’s decision to open a municipal carpark on Saturdays – or Shabbat, the day of rest for Jews.

It’s a day when Jews are not supposed to do anything resembling work, which can include something as simple as flicking a switch, turning on a light or driving.

So even opening a simple carpark to accommodate the increasing number of tourists visiting Jerusalem’s Old City is highly offensive to Orthodox Jews because it’s seen as a desecration of the Shabbat, by encouraging people to drive.

I was aware that earlier protests had erupted into violence on previous weekends – Orthodox Jews throwing rocks at police, or setting rubbish bins alight, even throwing dirty nappies or rotting rubbish at anyone they perceive to be desecrating the Shabbat.

But I never expected their anger would be directed at me.

I was mindful I would need to dress conservatively and keep out of harm’s way. But I made my mistake when I parked the car and started walking towards the protest, not fully sure which street was which.

By the time I realised I’d come up the wrong street it was too late.

I suddenly found myself in the thick of the protest – in the midst of hundreds of ultra-Orthodox Jews in their long coats and sable-fur hats.

They might be supremely religious, but their behaviour – to me – was far from charitable or benevolent.

As the protest became noisier and the crowd began yelling, I took my recorder and microphone out of my bag to record the sound.

Suddenly the crowd turned on me, screaming in my face. Dozens of angry men began spitting on me.

I found myself herded against a brick wall as they kept on spitting – on my face, my hair, my clothes, my arms.

It was like rain, coming at me from all directions – hitting my recorder, my bag, my shoes, even my glasses.

Big gobs of spit landed on me like heavy raindrops. I could even smell it as it fell on my face.

Somewhere behind me – I didn’t see him – a man on a stairway either kicked me in the head or knocked something heavy against me.

I wasn’t even sure why the mob was angry with me. Was it because I was a journalist? Or a woman? Because I wasn’t Jewish in an Orthodox area? Was I not dressed conservatively enough?

In fact, I was later told, it was because using a tape-recorder is itself a desecration of the Shabbat even though I’m not Jewish and don’t observe the Sabbath.

It was lucky that I don’t speak Yiddish. At least I was spared the knowledge of whatever filth they were screaming at me.

As I tried to get away I found myself up against the line of riot police blocking the crowd from going any further.

Israeli police in their flak jackets and helmets, with rifles and shields, were yelling just as loudly back at the protesting crowd.

I found them something of a reassurance against the angry, spitting mob.

I was allowed through, away from the main protest, although there were still Orthodox Jews on the other side, some of whom also yelled at me, in English, to take my recorder away.

Normally I should have stayed on the sidelines to watch the protest develop.

But when you’ve suffered the humiliation and degradation of being spat on so many times – and you’re covered in other people’s spit – it’s not easy to put it to the back of your mind and get on with the job.

I left down a side street and walked the long way back to the car, struggling to hold back the tears.

One Reply to “Jews disgrace themselves in Israel.”