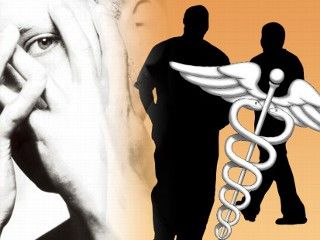 Paulo Serodio Says He Was Harassed, Assaulted After Defining Himself as African-American

Can a white guy be African-American?

Paulo Serodio says he is.

Born and raised in Mozambique and now a naturalized U.S. citizen, Serodio, 45, has filed a lawsuit against a New Jersey medical school, claiming he was harassed and ultimately suspended for identifying himself during a class cultural exercise as a “white African-American.”

“I wouldn’t wish this to my worst enemy,” he said. “I’m not exaggerating. This has destroyed my life, my career.”

The lawsuit, which asks for Serodio’s reinstatement at the school and monetary damages, named the Newark-based University of Medicine and Dentistry of New Jersey and several doctors and university employees as defendants.

Filed Monday in U.S. District Court in New Jersey, the lawsuit traces a series of events that Serodio maintains led to his 2007 suspension, starting with a March 2006 cultural exercise in a clinical skills course taught by Dr. Kathy Ann Duncan, where each student was asked to define themselves for a discussion on culture and medicine.

After Serodio labeled himself as a white African-American, another student said she was offended by his comments and that, because of his white skin, was not an African-American.

According to the lawsuit, Serodio was summoned to Duncan’s office where he was instructed “never to define himself as an African-American & because it was offensive to others and to people of color for him to do so.”

“It’s crazy,” Serodio’s attorney Gregg Zeff told ABCNews.com. “Because that’s what he is.”

Serodio, who lives in Newark, said he never meant to offend anyone and calling himself African-American doesn’t detract from another person’s heritage.

Neither the American Civil Liberties Union nor the National Association for the Advancement of Colored People responded to messages seeking comment on the meaning of African-American.

The Merriam-Webster Online Dictionary defines African-American as “an American of African and especially of black African descent.”

“There are people of all races who are African,” Serodio said, adding that he’s never had a problem identifying himself as an African-American until that day in Duncan’s class.

Zeff pointed out that Serodio only labeled himself after his instructors asked him to do so and was then penalized for it.

Defending an Identity or Unprofessional Behavior?

Serodio said he is a third-generation African of Portuguese ethnicity whose great-grandfather emigrated to Mozambique. He came to the U.S. in 1984 after being accepted at New York University.

He met his future wife and started a family and, after deciding to settle in the U.S. permanently, got his citizenship in the early 1990s. After doing research work on and off, including for UMDNJ, with pauses in between to be a stay-at-home dad, Serodio said he decided to become a doctor to follow in his parents footsteps.

His plan, he said, was to become a doctor and join Doctors Without Borders where he could travel back to Africa to do charity work like his parents, either as an internist or possibly a neurologist. He started medical school, he said, when his eldest child was in first grade.

The family, he said, had hoped to hold a joint graduation party this spring for his son’s passing out of fourth grade and for Serodio’s graduation from medical school. But they will only be celebrating his son’s achievements this year.

The lawsuit claims Serodio began to be harassed by other students who sought disciplinary action against him for his statement in Duncan’s class, but was never given a chance to defend his views against the complaints.

UMDNJ spokesman Jeffrey Tolvin told ABCNews.com that university officials had not yet seen the lawsuit.

“We have no comment on this matter,” he said.

In September 2006, Serodio said he again asked to define himself culturally as part of another course exercise. Again, according to the lawsuit he said he was a “white African-American.” And again, he was called to the course instructor’s office and told never to define himself that way again.

According to the lawsuit, Serodio then wrote an article for the student newspaper, titled “A More Colorful View Than Black and White,” in an attempt to explain his self-identification and to call for tolerance at the school.

But when complaints started pouring into Dr. I. Thomas Cohen, then the dean of student affairs, the lawsuit alleges that Serodio was called in again and told by Cohen that if he “lay low for awhile” Cohen would see that a record of the incident would not be placed in Serodio’s transcript.

Serodio told ABCNews.com that he believes that America has outgrown the labels of black and white, something he wrote about in the article.

His own children, he said, are of mixed ethnicity  European and Chinese. In his own case, he said, “There’s a distinction to be made here between ethnicity and being from Africa.”

Spiraling Out of Control

The lawsuit claims Serodio tried to stop publication on the newspaper article, but was too late. In response, the professor of the latter cultural class posted a reply on the bulletin boards at the medical school stating that Serodio “had failed to learn professionalism and humanism.”

In January 2007, Serodio was made to promise he would never again write in any public forum at the school at the risk of facing disciplinary action, according to the lawsuit.

But Zeff said that the same month, his client was designated as the person who would take notes from a particular class for posting online, as was customary. The notes, Zeff said, contained a few jokes and comments as was typical for students who posted notes online and had been approved by the class professor.

But after a fellow student complained, the same professor that approved the notes filed a complaint about their content, according to the lawsuit, and school officials demanded that Serodio submit to a psychiatric evaluation.

The evaluation was given in April 2007 and Serodio was declared “fit for medical student functions,” according to the lawsuit. But after a disciplinary hearing on April 1, which consisted of testimony from anyone claiming to be offended by Serodio’s comments, he was notified of his suspension.

The lawsuit claims Serodio was suspended on May 15, 2007 for a period “of not less than one year.”

Messages and e-mails left with Duncan and Cohen as well as UMDNJ Dean Dr. Robert Johnson were not returned.

His suspension, which Serodio said was for “unprofessional behavior,” meant he was unable to take the board exams reserved for students preparing to enter third year and therefore could not transfer elsewhere to continue his education even though he completed all the second-year coursework.

Serodio told ABCNews.com that he was technically reinstated last spring, but it was too late to start his third year because he still had not been allowed to take his second-year exams.

“I feel unprepared now,” he said. “That was very penalizing to me.”

So Serodio said he decided to take a year’s leave of absence to spend time with his children and get things sorted out with the school, while trying to stay current on his studies for the exam.

The lawsuit is asking for reinstatement to UMDNJ and to the National Board of Medical Examiners so Serodio be allowed to take his board exams. The suit is also asking for recognition that UMDNJ’s actions were discriminatory and retaliatory and for unspecified monetary damages.

“I felt this issue had to be resolved,” he said.

For now, Serodio is hoping to be able to get his medical degree and put what he considers to be the humiliation of the incident behind him.