A businessman who kidnapped a burglar has been spared jail after a judge accepted that he was ‘driven to distraction’ by repeated thefts.

The bungalow had been repeatedly raided during the previous six months, with £4,500 of goods stolen from it.

Preson claims he was told that an officer would not be sent out for two days, and so he set about catching the thieves himself.

He and an employee, 25-year-old Ashley Shepherd, captured one of the culprits, Joshua Clarke, that night.

They forced the 18-year-old to direct them to the home of another intruder, 29-year- old Nathan Barnes, where a skirmish took place, a court heard. Preson, a married father-of-three, was later arrested and charged with kidnap, an offence that carries a maximum sentence of life in prison.

He admitted the charge, but walked free from Leicester Crown Court after being given a 12-month sentence suspended for two years. 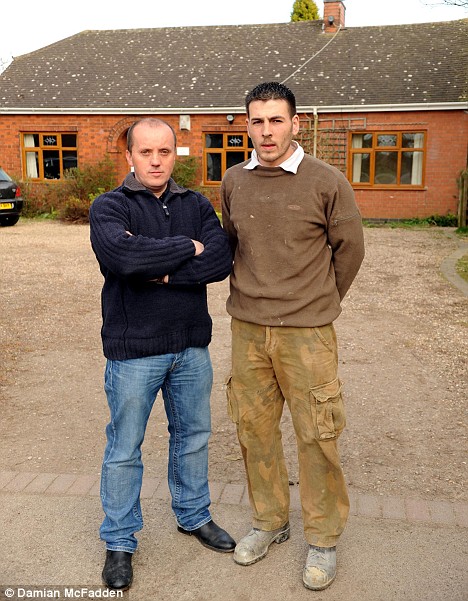 Building firm boss Sean Preson, left, and employee Ashley Shepherd stand in front of the property they were protecting

Judge Michael Pert QC said: ‘I’m prepared to treat your case as an exception. I accept you were driven to distraction by people constantly burgling your premises.

‘The fact you called the police and were told they’d send someone to see you in two days – in my judgment, it would give anybody pause for thought. Anyone would be sympathetic.’

Preson, of Huncote in Leicestershire, was driving his family home from a restaurant last August when he spotted trespassers trying to steal floodlights from the building site.

He confronted one of the intruders, who was wielding a screwdriver, and disarmed him. The man escaped in a car, two others hid and another ran off.

Preson claims that after the police told him it would take two days for an officer to arrive, he said he would handle the matter himself. He met Shepherd and they tracked down Clarke, who had fled on foot.

Shepherd knocked Clarke to the ground while Preson stood nearby holding a crowbar.

They then drove him back to the bungalow, where they questioned him. Shepherd also sprayed the teenager with window-cleaning fluid, and he then gave them the address of Barnes, who was duly dragged out his home in a headlock by Shepherd.

Clarke, who had suffered minor injuries, was then bundled into their van and driven home. Preson was arrested the next day.

Adrienne Lucking, defending, gave the judge 40 references and testimonials in support of Preson at his sentencing on Friday.

After the hearing, Preson said: ‘We were the victims who now come away as criminals while the culprits get off scot-free. We only detained the youth for about an hour, whereas I was put in a cell for 36 hours.

‘I understand the lad was in fear, but I believe if someone goes on your property without your permission they should be prepared for what may happen to them. I acted out of frustration.’

Shepherd, also of Huncote, admitted assault and was also given a 12-month sentence, suspended for two years, with 150 hours of unpaid work.

Clarke and Barnes were each cautioned for theft. A 28-year-old woman was also cautioned, and a 24-year-old man was charged with attempted theft and given a 12-month conditional discharge at an earlier hearing.
Yesterday a Leicestershire Police spokesman said Preson misinterpreted their response.

‘It was established during the call that these intruders had left the scene 20 minutes prior to the call being made and there was no immediate risk of harm,’ the spokesman said.

‘Officers were assigned to deal with the incident 50 minutes after the call was received but were diverted.

‘We do not condone taking the law into your own hands.’