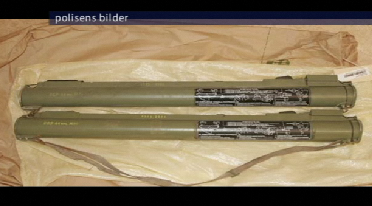 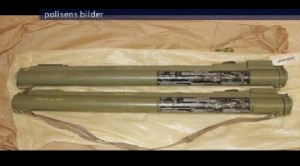 The news from Sweden is coming so thick and fast that it’s hard to keep up with it. This particular story is worth noting because of the sheer firepower involved. Antitank grenade launchers — in Stockholm!

Look here for a photo of the weapons seized (the text is in Swedish).

Gun control legislation is supposed to prevent this sort of thing. Do you think a new law is in order, one that mandates fingerprint registration, a background check, and a ten-day waiting period for any would-be purchaser of grenade launchers?

Six young men have been detained in custody charged with serious weapons crime after police seized large quantity of weapons and explosives outside Stockholm.

The haul, found in a cellar in Spånga and an apartment in Sundbyberg, included grenades, antitank grenade launchers, automatic weapons, pistols and explosives.

The swoop took place in July and the suspects were arrested between end of July and August.

The weapons are both military and civilian, some of which have been stolen in Sweden, others from the former Yugoslavia.

Ulf Göranzon, a press spokesman at Stockholm police, described the weapons as being “generally very heavy”.

Speaking to the TT news agency, Göranzon said it was “worrying that it is so easy to procure weapons from that part of Europe. There are plenty of weapons in those countries.”

Prosecutor Henrik Söderman is also concerned by the extent of the weapons seizure. He has requested a fresh hearing on the detention issue on Friday.

“Of course one is a bit jumpy,” Söderman told TT. “We are talking about weapons such as antitank grenade launchers and explosives”.

Söderman could not comment on whether the weapons were meant to be sold or used in robberies.

The six suspects are all aged between 22 and 27 and are already known to the police. A few of them are suspected of serious weapon crimes, and one is suspected of smuggling. All the men are from the Spånga and Järfälla suburbs in northwest Stockholm.

As is usual in Swedish press reports, there’s no mention whether these young men are “persons of Swedish background”. Silence on this topic usually means that immigrants are involved.

For our Swedish readers: are Spånga and Sundbyberg generally known as immigrant ghettoes.