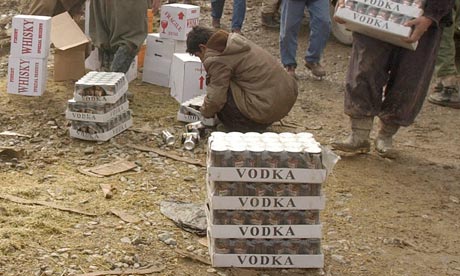 Two Iranians have been sentenced to death for persistent consumption of alcohol under the country’s Islamic Sharia law, which forbids the use, manufacturing and trading of all types of alcoholic drinks.

The two, who have not been named by the authorities, have each previously been lashed 160 times after twice being arrested for consuming alcohol. Being convicted for the third time makes them liable for the death penalty.

The head of the judiciary Seyed Hasan Shariati, based in Iran‘s north-eastern province of Khorasan Razavi, told the semi-official Isna news agency that the supreme court had upheld their death sentences and that officials were preparing for their execution.

“Two people who committed the offence of consuming alcohol for the third time have been sentenced to be executed. The verdict has been confirmed by the supreme court and we are preparing to administer it,” he said.

Under Iranian Sharia law, certain crimes such as sodomy, rape, theft, fornication, apostasy and consumption of alcohol for the third time are considered to be “claims of God” and therefore have mandatory death sentences.