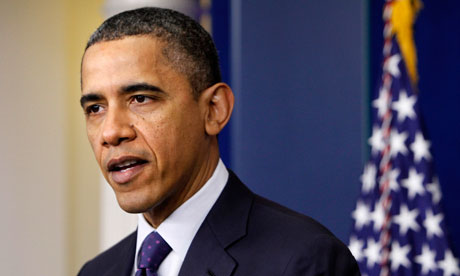 Do believe the hype, says Professor Turley: the NDAA, signed into law by President Obama on 31 December, authorises the US military to detain citizens indefinitely without trial. Photograph: Jacquelyn Martin/AP

President Barack Obama rang in the New Year by signing the NDAA law with its provision allowing him to indefinitely detain citizens. It was a symbolic moment, to say the least. With Americans distracted with drinking and celebrating, Obama signed one of the greatest rollbacks of civil liberties in the history of our country … and citizens partied in unwitting bliss into the New Year.

Ironically, in addition to breaking his promise not to sign the law, Obama broke his promise on signing statements and attached a statement that he really does not want to detain citizens indefinitely (see the text of the statement here).

Obama insisted that he signed the bill simply to keep funding for the troops. It was a continuation of the dishonest treatment of the issue by the White House since the law first came to light. As discussed earlier, the White House told citizens that the president would not sign the NDAA because of the provision. That spin ended after sponsor Senator Carl Levin (Democrat, Michigan) went to the floor and disclosed that it was the White House and insisted that there be no exception for citizens in the indefinite detention provision.

One Reply to “The NDAA’s historic assault on American liberty”