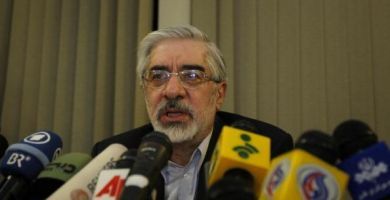 BEHROUZ MEHRI/AFP/Getty Images
Iranian presidential candidate Mir Hossein Mousavi at a press briefing in Tehran after the June 12 vote
The Iranian election is currently in turmoil. Both Iranian President Mahmoud Ahmadinejad and challenger Mir Hossein Mousavi are claiming to be ahead in the vote. Preliminary results from the presidential vote show Ahmadinejad leading; Iranian Election Commission chief Kamran Danesho held a press conference at 11:45 p.m. local time and announced that with some 20 percent of the votes counted, the president was leading with 3,462,548 votes (69.04 percent), while his main challenger, Mousavi, had 1, 425,678 (28.42 percent). Sources tell STRATFOR that these preliminary numbers pertain to the votes from the smaller towns and villages, where the president has considerable influence, as he has distributed a lot of cash to the poor.

Prior to the announcement of the results, Mousavi held a press conference in which he said he was the winner of the election. The opposition camp is greatly concerned about fraud, and STRATFOR has been told that Mousavi has vowed to resist any fraud, even if it entails taking to the streets. This means there is considerable risk of unrest should Ahmadinejad emerge as the winner. But so far there is no evidence that the government is mobilizing security forces to deal with any such eventuality.

The situation is being monitored carefully, as it is potentially explosive.