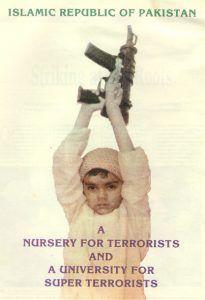 The New York Times reported last week that the United States is considering expanding its covert war to Baluchistan, a sprawling province of deserts and jagged mountains on the border of violence-plagued southern Afghanistan.

So far, missile strikes by pilotless Central Intelligence Agency-operated drones, which Pakistan objects to, have been limited to ethnic Pashtun tribal areas to the north of Baluchistan, mostly in the North and South Waziristan regions.

“America is trying to scare us but it won’t work. Rather it will be a justification,” Noor Muhammad, a well-known radical cleric who runs a madrasa, or religious school, in Quetta, capital of Baluchistan province, said of possible U.S. strikes.

“America is foolish because it will only force more people here to stand up against it,” he said.

Sitting in a room his madrasa complex, the 60-year-old grey-bearded Muhammad denied any policy of sending young men from his school to fight Western forces in Afghanistan.

But he said it was the duty of every Muslim to do that.

“If infidels occupy a Muslim land then it’s obligatory for all Muslims to do jihad … Preaching jihad is my duty,” he said.

President Barack Obama has said the United States is not winning in Afghanistan, more than seven years after U.S.-led forces toppled the Taliban, and he is due to announce the result of a review of policy in Afghanistan and Pakistan in coming days.

U.S. officials say success in Afghanistan is impossible without tackling the problem of militant safe havens in Pakistan.

In the Pashtunabad area on the outskirts of Quetta, support for militancy appears strong. Walls on a street leading to Muhammad’s madrasa are daubed with slogans such as “Long Live Mullah Omar.”

Afghan and foreign officials in Kabul have long said they believe Taliban leaders, including supreme leader Mullah Omar, are hiding in Baluchistan. Pakistan denies that. END_OF_DOCUMENT_TOKEN_TO_BE_REPLACED