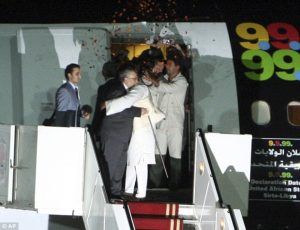 FOX NEWS… Medical evidence that led to the release of the Lockerbie bomber was reportedly paid for by the Libyan government, which encouraged doctors to say he only had three months to live.

The life expectancy of Abdel Baset al-Megrahi was crucial, The Sunday Telegraph reported, because Scottish law mandates that prisoners can be freed on compassionate grounds only if they are considered to have three months or less to live.

Al-Megrahi, 57, is suffering from terminal prostate cancer and was released by Scottish officials last month. He was the lone person convicted in the 1988 bombing of a Pan Am airliner over Lockerbie, Scotland. The attack killed 259 people aboard the plane, most of them American, and 11 on the ground.

Two of the three doctors commissioned by the Libyans provided the required three-month estimates, The Sunday Telegraph reports, while the third also indicated that the prisoner had a short time to live. That’s in contrast with findings of doctors in June and July who had concluded that al-Megrahi had up to 10 months to live, which would have blocked his release.

“The figure of three months was suggested as being helpful [by the Libyans],” Professor Karol Sikora, one of the examining doctors and the medical director of CancerPartnersUK in London, told The Sunday Telegraph. “To start with I said it was impossible to do that [give a three-month life expectancy estimate] but, when I looked at it, it looked as though it could be done — you could actually say that.”