Italian TV is very dynamic. We used different colours for different speakers here, and it was challenging at times, but we got it right. Please enjoy!

And the story details, who this doctor is and more can be found at:

Short, excellent and important. Kudos to The Fat Emperor. If Twitter hadn’t put me in Tweet jail for a week for saying true things about HCQ and Ivermectin, like they did to this doctor, and this fellow, I would put a nice comment under his tweet.

Best 2 minutes of reality you will see today, or any day really…
(I edited to get the best bits) pic.twitter.com/EGY2IA6EHG

There are some great moments in this segment as well. Not to mention a link to the long long list of safe, cheap and effective treatments we are being denied for Covid19

Here is a link to the actual documents, and related videos at the Project Veritas site. Dr. Robert Malone is reading through them and has some commentary and will have more.

UPDATE #2 REDSTATE.Com US Military Report States COVID-19 Was Created by a US-Funded EcoHealth Alliance Program at Wuhan Institute of Virology

As I listen through Robert F Kennedy’s book on the Real Anthony Fauci, and how the various medical regulatory boards all KNEW FOR A FACT that ivermectin and HCQ would lower the death rate by over 80% and deliberately withheld it and even placed obstacles in the way of its use for Covid, there is do doubt left in my mind that the title of this post is correct.

Add to that how difficult it actually is to get the book itself. Amazon judo-propaganda’d me like Twitter does. The way this works, is they took my order, and for over a month pretended they would send me the book, kicking the delivery date down the road until finally they sent me an email saying they had no idea when they could get it to me and do I want to cancel the order.

Of course, like how Twitter and Facebook let you waste your time and effort composing and researching a post they don’t let anyone outside your immediate circle see, Amazon made sure that I wouldn’t try and get the book anywhere else as they jerked me around for delivery till they figured it didn’t matter anymore and the real impact of the book was lost.

I managed to get a copy of its contents anyway. And let me tell you, its a M U S T R E A D.

This is about all you need to know at one level. There are two sides to this issue one must suspect. The government totalitarian-authoritarian aspect of this, and the outrageously corrupt giant drug cartels like Pfizer that would give Joaquín “El Chapo” Guzmán a wet dream. Here is the reveal on that side of it. Twitter suspended the account of the media company that posted this video. Which tells you all you need to know about Twitter.

The videos for the weekly Reiner Fuellmich webcast is done by Oval.media. Anyone who wishes to support their efforts may do so at this link

Please read the story over at the Lancet. This doesn’t mean they should be forgiven for their knowingly fraudulent story about Hydroxychloroquine. In fact they should be up on criminal charges for complicity to mass murder for lying about a safe and effective medicine that could have saved tens of thousands of lives.

But late to the party is better than staying at home alone. So they at least have begun to leak a little truth here and there.

The epidemiological relevance of the COVID-19-vaccinated population is increasing

High COVID-19 vaccination rates were expected to reduce transmission of SARS-CoV-2 in populations by reducing the number of possible sources for transmission and thereby to reduce the burden of COVID-19 disease. Recent data, however, indicate that the epidemiological relevance of COVID-19 vaccinated individuals is increasing. […] This proportion is increasing week by week and was 58.9% on 27. October 2021 (Figure 1) providing clear evidence of the increasing relevance of the fully vaccinated as a possible source of transmission.

For readers of this site, or Alex Berenson’s Substack. this is all old news. Weeks old even. But to see it in the Lancet, even as our governments INCREASE not just the pressure to take these awful shots, but increase the legal amount of discrimination against those who refuse them, is a historical class crime against the human race.

UPDATE: I sent this Lancet link to a group of doctors with a request for thoughts and the simplest interpretation of what the article says, and I will post the answers I get as I am able. Below is the first one. But as I did not get explicit permission to post this, I won’t put the name of the doctor who sent it. So take this interpretation of the article or leave it as you wish.

Don’t vaccinate…do not mass vaccinate during a pandemic with such infectious pressure.
the vaccinated are becoming infected and can get very sick and can transmit pathogen to the unvaccinated. There is no difference between the vax and unvaxxed and in fact, the vaxxed can be more infectious…especially when showing symptoms.
thats as simple as I can get. 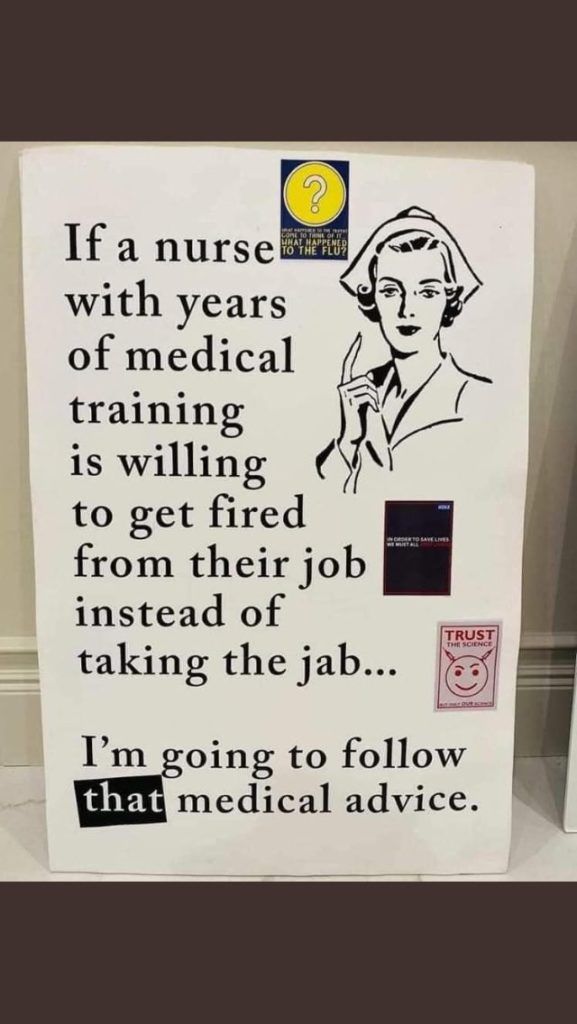 Long, but watch it all.

Also a letter from another nurse who was force terminated for not taking an injection of something she, in her expert opinion and personal experience, did not want.

Why I Am Leaving My Nursing Job

CHI Memorial, Dignity Health, and All Administrators in Chattanooga, TN and throughout our companies, the following letter is my heart felt forced termination for not complying to allow, against my own will, the injection of an illegally mandated vaccine under Emergency Use Authorization.

First, I would like to express I have enjoyed working in my unit for the last three years. We have a culture of helping and supporting each other through the best and worst of times. I worked through the 2020 COVID pandemic when we did not have proper PPE. Our facility’s PPE policies were changed several times to omit use of PPE used with infectious diseases we once would take protection from when encountering. Our loop masks that we wore for the entire 12-hour shift came in a box for months that stated on the side “not for medical use.” In the beginning of the pandemic, we were not afforded N95 masks unless we worked in the COVID units then we were able to have 1 N95 mask, we were handed a brown paper lunch bag with a sheet of paper to log each shift we wore it for. After 7 shifts of wearing the same N95 mask we could turn it in for a new one while the used one was sent for sterilization. Loop masks and N 95 masks are only made for a one-time use, but we knew PPE was limited and took what we could get. […]

Testimony from Dr. Steven Hatfill at the Rome summit on Covid. There will be more videos from this event soon.

The original link for this video is here. https://drstevenhatfill.com/ics-2021-speaker-dr-steven-hatfill/

How exactly is this not communism in its final stage? Ideology before life.

When governments tell doctors what they can and cannot say and do about treatment, and much worse, what they must say, and may not say, about a government plan to treat everyone, then this is not science or medicine. Case in point, Canada’s Minister of Health is a graphic designer with no medical training at all, and is a perfect example of what may be a result of Klaus Schwabs’s little future-leaders project.

It never was and anyone who says it is, has not thought it through.

Doctors deal in medicine and scientists deal with science. And in Western thought, each individual often draws different conclusions which is why for all my life’s experience in Canada, the default response to a doctor’s visit one is unhappy with has always been: “You must go and get a second opinion”. Even doctors told you that. This is default thinking under reason and logic.

Now we have proof that in both Canada and Australia, the same tactic was used. Government threatened doctors to follow a political line of reasoning that was even internally inconsistent and self contradictory. For example, that they may not ever prescribe a treatment for Covid at all but only point to a Vaccine, which did not even exist for a year of this policy.

That recommending a course of HCQ or Ivermectin would lead to loss of livelihood or worse.

And that this policy we see proof for, being in Canada and Australia, and we can reasonably assume France, the UK, much or most of the USA and other nations, leads us to believe that this was not, ever, nor is not about medicine or science.

We posted the actual email sent out to doctors in Canada from the Canadian government that stated that they may not reccomend or prescribe untested or unsafe treatments for Covid such as HCQ or Ivermectin etc. and could not in any way say or do anything leading to “vaccine hesitancy” despite the fact that the vaccines discussed are not safe by definition as they have not even finished trials yet, but drugs like HCQ and Ivermectin have been out for decades and are known to be safe and one even got a Nobel Prize for medicine.

At the moment I cannot find that post. But it was Dr. Charles Hoff who, I believe actually revealed that email.