1. RCMP admits they hack Canadians’ devices to spy on them

In a breathtaking admission, the RCMP say they’ve secretly used spyware on Canadians’ devices to get audio and visual recordings of Canadians without their knowledge.

According to Politico, the RCMP claim they only use such spyware in the most “serious cases,” such as when there are national security concerns. However, this is the first time the RCMP has openly admitted that they infiltrate mobile devices to collect data, despite having access to the technology for years.

Their admission came after a Conservative MP questioned what government programs are used to gather data on Canadians last week.

“This is a kind of capability that they have done everything possible to keep incredibly quiet,” said UofT senior research associate Christopher Parsons.

“This is a remarkable finding and, for the first time, publicly reveals that the RCMP is using spyware to infiltrate mobile devices, as well as the broad capabilities of their spyware.” Parsons continues, saying that many security experts have been aware of these capabilities but that this is the first time the RCMP has admitted it. He added that this “is the cleanest, most straightforward explanation of what they’re capable of doing that I’m aware of.”

(Unfortunately this article gives no substance in terms of the name or location of the software, how to detect or remove it. We will see if we can look deeper into it and find out how to get rid of it if possible. But what is apparent, is that this is a bit of code that circumnavigates Signal or other com software that lets you speak privately with anyone. The best advice for people whether they trust the police to be an honourable force, or believe they have become a politicized set of state thugs, is to leave your phone at home, even if you are just going to Church. As we see in the USA, Guilty by Association has taken on  Lenin like proportions. This means any location or people you speak with that may be a threat to the new ideology that governs Canada, as opposed to the one most people still think applies, could find themselves with a low social credit score. That could be a problem when it comes time to buy your cricket powder.)

2. Ottawa Community Newspaper renames Canada Day, the celebration of the creation of Canada every year on July 1st, to a dialectic attack on Canada using victim politics of Amer-Indian peoples. Please scroll to page 9 of this link to read an article which doesn’t mention Canada day once, but is instead a partial and inaccurate history of the area based on neo-Marxist victim dialectics. This paper is from an Ottawa community newspaper which enjoys having some of Ottawa’s wealthiest people living in it. It is right next to Rockcliffe Park, which has many of Canada’s most powerful people living in it.

Winnipeg, the home of the lab that likely did the initial gain of function work on SARS and sent it to China, the lab which Trudeau called a whole election just to distract us from the heavy questioning of the PMO about his connection to the Chinese spies at that lab, has also renamed Canada day as a form of dialectic attack against Canada’s nationhood.

3. USA Watchdog does a 1 hour interview with David Martin on the gene therapy shots. He uses the title “Doctor” but I think he is a Ph.D not a medical doctor.  He is primarily a researcher of patents and patent information from what we see in his segment on The Corona Research Project with Reiner Fuellmich. We have posted many videos of him in the past, and some questions were raised in the comments by one of our very astute readers. But this video is interesting. Here is his bio from his website which reads more like a musician or an actor’s one sheet. There is no educational background given. If anyone knows more about him, please do post it in the comments. I am not saying he is not credible, or that he is. It would be great however to know more about him. I respect a person’s opinion based on the merits of the argument irrespective of the speaker. But when the person speaks from his own authority, it would be helpful to know what that authority actually is.

Having said all that, what he is actually saying about the clot-shots jives with what others say, and even my own experience. It sure seems to me that the people I know who have 3 or more shots get Covid a lot. The people I know who have none, also get sick sometimes. The difference so far seems to be that those who get the shots have WAY more fear of the disease and act like they are much sicker than they would have been had they had the same symptoms before they suddenly cared about the taxa of the particular virus, let alone the designation of the particular mutation of it.

The people who didn’t get the shots in my acquaintance, also generally don’t bother to test, and generally figure they have a flu or cold and go to bed for a day or two and then get back to life when they feel better. Like we all used to do for our whole lives.

4. More murders of non-muslims as motivated by Islam and its scriptures.

This is the chilling video of the murder of Hindu tailor Kanhaiyalal by Islamist radicals who posed as customers and then suddenly attacked and killed him on the spot with knives chanting religious slogans. Tailor screams asking them for a reason why they were attacking him… pic.twitter.com/yNuf8isbCh

5. Here is some more utter BS trying to hide the effects of injections or lack of action by claiming the usual

Aus ?? Now we have Pandemic Babies ? 5% of babies born with co infection are ending up in ICU with Respiratory Illness, inflammation of Lungs, Heart and Brain….Ask yourself, how can they sit there with a straight face and pretend they don't know why…??????? pic.twitter.com/YA8p1F1Phd

Thank you all for your posts and comments today. It was a very very busy day today. I hope to have lots of material to share with you over the coming few days as it gets processed and written up at RAIR Foundation. Here is a shot of James Topp arriving at Hogs Back in the south end of Ottawa just before he headed off to the end of his massive walk, at the War memorial downtown Ottawa. 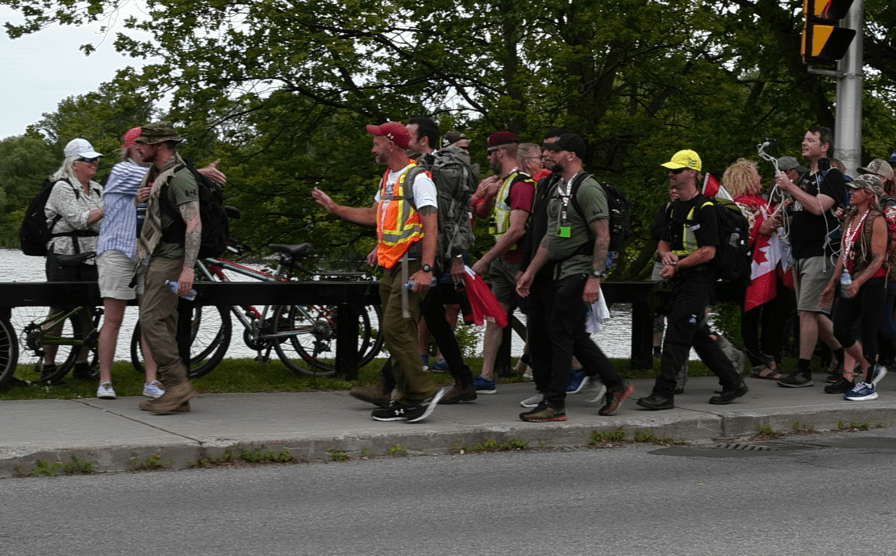 One Reply to “RCMP admits to hacking Canadian’s devices to spy on them, and more wonders from Trudopia: Links 1, June 30th, 2022”